A crystal globe goes to the season's best athlete in each discipline. Cuche topped the final GS standings with 474 points.

Cuche clocked the third-fastest time in the first of two runs on Friday, 0.86 seconds behind Raich, despite dropping one of his poles at the top of the course.

It is the first giant slalom title for Cuche. Normally a specialist in the super-G and downhill, Cuche finished seventh in both those speed disciplines this season, after winning the downhill the past two seasons.

The globe caps a strong season for Cuche, who set out at the start of the World Cup circuit in October with two goals in mind: Win a medal at the World Championships in Val d'Isère, France, and win the crystal globe in the downhill.

While Austria's Michael Walchhofer took the downhill globe, Cuche did double his wins at the championships in France with two medals. He won gold in the super-G, becoming the first Swiss man to do so in 20 years. It was his first win of the season. He narrowly missed winning the downhill there by 0.04 seconds and took silver instead.

"I'm overjoyed," he said at the time. "It's super that it panned out again."

Last season Cuche had a dozen podium finishes on the World Cup circuit. Winning an overall title this year helps to cement his roll as one of the main powerhouses of the Swiss team.

But the globe Cuche may have wanted most – the grand crystal globe for the best all around skier – is likely to go to Raich.

On Saturday the men will race the World Cup's final slalom course and while the women will compete in a giant slalom event. The season wraps up in Sweden on Sunday with a team event.

Other Swiss skiers have mounted impressive performances this season as well. Carlo Janka won the crystal globe for super-combined races. Teammate Silvan Zurbriggen finished slightly behind Janka in the overall super-combined standings with 231 points to Janka's 242.

Didier Défago is currently ranked sixth overall and third in the downhill.

For the women, this year's World Cup circuit was similar to those in the past: Catch Lindsey Vonn.

The American skier has had 22 podium finishes this season and captured the overall grand crystal globe for the second year in a row. The 24-year-old athlete follows in the tracks of Anja Pärson of Sweden who won back-to-back globes in 2003-2005.

Vonn also won five super-G races in a row, which combined with her gold at the championships in France, proved enough to give her the crystal globe for that discipline. She was the first American to win that title.

"It's incredible," she said. "I was hoping so much that I would win."

Switzerland's Fabienne Suter currently leads the Swiss women in the overall standings at sixth place with 752 points. Suter has performed her best in the super-G, where she currently ranks third overall.

Swiss teen sensation, 17-year-old Lara Gut had a mixed season. She captured two World Cup podium finishes and two medals at the World Championships in France, but she is currently ranked 11th overall. 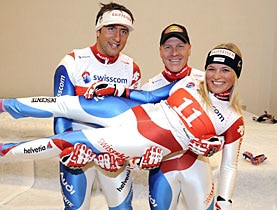 Switzerland's eyes will be on two very different skiers – Didier Cuche and Lara Gut – as the World Cup Ski racing circuit kicks off this weekend ... 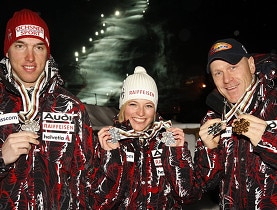 The Alpine Ski World Championships have ended in Val d'Isère, France, where the Swiss team usurped Austria for the first time in a decade to win ... 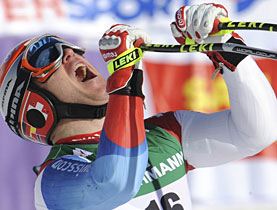 Swiss skier Didier Cuche has won the men's super-G at the World Championships in France, becoming the first Swiss man to take the top spot in the ...

A look at some of the highlights from the 2009 Alpine Ski World Championships.