Although children who have attended some form of day care have a significant edge when they begin school, the head start does not last, new research shows.

A team led by Andrea Lanfranchi, a professor at Zurich's University of Applied Sciences of Special Needs Education, compared children who had spent their first years solely at home with their parents to those who had attended a nursery, play group or had spent time with a child minder.

The first part of the study, published in 2002, showed that the time spent outside the family fostered the children's development. Teachers assessed the skills of two groups of pre-school children aged four and six in three Swiss cities.

"Children who had attended day care had a clear advantage, in the teachers' estimation, over children who had not – in language development, social and cognitive skills," Lanfranchi told swissinfo.ch.

But when the researchers returned to the same group seven years later to establish whether the positive effect of day care had lasted, they found that it had been overridden by other factors.

After interviewing 429 of the original 642 participants and their teachers, researchers found that the positive effect of child care had diminished and other factors relating to the parents had become much more important.

At this stage it was mainly the ambition, level of education and nationality of the parents that determined the success of the children.

However Lanfranchi said that it was still possible that the beneficial effects of early day care had persisted, although other influences - such as parental support - had been superimposed on them.

It is also possible that the early benefits would be observable later in adult life. American studies have shown that people aged 40 who had partly been cared for outside the home before school age had a higher income and committed less crimes.

The study also looked at the question of the quality and intensity of day care. Structures outside the family home are necessary, Lanfranchi said, but they should be improved. Finding the right amount time spent in day care, or crèche, is also a factor.

"We are sure that the time in the crèche is not intensive enough for lots of children. When children who don't have much stimulation at home are only sent two half days per week, that is much too little," he said.

"However when children attend day care five full-days a week, which is common in the United States, one can also see bad effects." The ideal is usually somewhere in between.

Lanfranchi also believes that crèches need to develop from a supervision-based mandate to become institutions that also help children in their linguistic and intellectual development.

"We are only just beginning in Switzerland to speak about an educational element in the crèche's role. At the moment the staff are basically there to care for the children, although of course educational elements are being incorporated.

"But this is not happening systematically and we would like crèche directors to consciously foster language development, for example."

The professor stressed the importance of early educational support for parents from a socially disadvantaged background, such as low-income immigrants.

With this need in mind, the team aims to carry out and evaluate a new programme of house-centred support, in which specially trained advisors will visit families on a regular basis from birth.

Researchers are in the process of identifying families to participate in the scheme. "There are a number of children in the population who need specialised help, and if we don't mobilize this help now, these children will have big problems in school," Lanfranchi warned.

The Swiss government wants to introduce new measures to guarantee the well-being of children looked after by someone other than their parents or grandparents.

It has proposed a complete revision of the law on foster children to include childcare in general.

The new regulation foresees the creation of a department in each canton to be responsible for licensing crèches and childminders – the latter to include relatives and friends who spend more than 20 hours a week looking after someone else's children.

Parties and institutions have until September 15 to provide feedback on the plan. 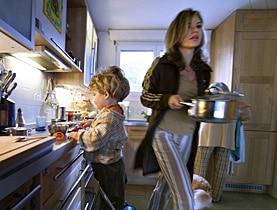 A Swiss family organisation says authorities must do more to counter the poverty and job-related problems facing the country's growing ranks of ... 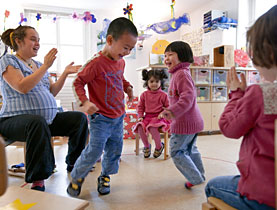 The United Nations Children's Fund (Unicef) has given Switzerland very low marks for its efforts to support families with young children. ... 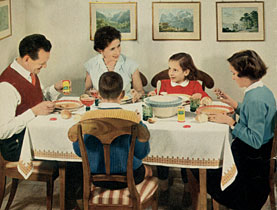 Families are thriving in Switzerland, although they are confronted with ever increasing demands, research presented in Zurich has found. But the ...

My first day at school

Elias steps into the classroom