Since Swiss native Tina Roth Eisenberg launched her design blog "swissmiss", she has notched up one dizzying success after the other. The New York-based designer now runs several companies and is a permanent fixture on the international design scene.

Twenty years ago, Roth Eisenberg moved from Appenzell to New York for an internship as a graphic designer. And she has never really looked back. To this day, she is the most successful Swiss blogger. But the designer from a small town in canton Appenzell Outer Rhodes remained close to her roots even after becoming a star of New York's creative scene.

It all started when, alongside her work as a web designer, she started her blog "swissmiss"external link in 2005, at a time when, as she says, “there was no Pinterest, no Tumblr, no Instagram”.

"My blog has opened many doors for me,” Roth Eisenberg reflects.

The designer’s good mood is immediately infectious. Her warm enthusiasm was the first thing that struck me five years ago when I visited her in her design studio in an old industrial building in Brooklyn. In 2008, she founded "Studiomates" there, the first co-working space in the city.

Today, I can see that her new premises combine simple aesthetics with industrial charm. Her second co-working space is called "Friends Work Here" and her three other companies are located on two floors. But for Roth Eisenberg they are more than just companies; they are close to her heart. She calls them "labours of love."

So how did an Appenzell designer in New York become a digital pioneer?

Before her blog became an instant success, her mother also ran a large business with many employees. Roth Eisenberg only realised later that when she was a child, it was rather unusual for a woman and mother to also be a "badass business lady,” as she puts it.

And her father was "Mr. Macintosh”. She recounts the story of how he came home with a small Apple computer in 1984. At the time, he was working as a real estate agent representing premiere office space in the eastern Swiss city of St Gallen. Apple was a brand new company in Switzerland, and Roth Eisenberg’s father received his first Mac computer for renting office space to them. He had previously written programmes on DOS computers, and he eventually founded a Mac school and the first Mac magazine in Switzerland.

‘The web was my world’

During her first years in New York, Roth Eisenberg worked as a web designer for agencies before she started blogging in her spare time.

"The web was my world. I was an early Twitter user and well-connected in the design world. So I quickly filled the tables at my first co-working space and attracted some of the biggest names in the web design world,” she says. The space evolved, unplanned, into a creative hub for the web, design and innovation, and was frequently visited by people working for technology companies.

The designer now lives in Brooklyn with her two school-age children. Anyone who follows her on Instagram feels as though they know her family. She is now "happily divorced" from their American father. The four of them just spent a skiing holiday together.

Does she worry about everything about being online, including her children and her private life? In Switzerland, people are generally more reserved, and those who feature their children on social media are often criticised. Has she adapted to more open American ways of dealing with her private life, or is that just her personality?

She says that at first, her New York ex-husband didn’t like it when she put pictures of the children on Instagram. "We had endless debates," she says. In this respect he is "the Swiss," she laughs.

"Now I always ask my children if I can post pictures of them, and they sometimes say no."

‘The events were always full’

When Roth Eisenberg came to New York City, she had no money to attend expensive events and meet creative people. So she founded “CreativeMornings,”external link now her largest company. Her initial plan was to bring together inspiring personalities from the New York creative industry for a monthly free event. There was breakfast and an inspiring talk.

“For two years I used nothing but my blog to advertise the CreativeMornings in New York, and the events were always full.”

Today, 1,500 volunteers in 65 countries and 200 cities organise monthly CreativeMornings. Every month, 20,000 creative people come together at no charge. The events are sponsored by big technology companies such as Adobe and Mailchimp. Roth Eisenberg intends to focus her career on CreativeMornings for the next 10 years, with plans to extend the range of events to creative workshops in addition to the monthly gatherings.

Her checklist app "TeuxDeux"external link evolved in the co-working space, after Roth Eisenberg complained that other such apps have too many features. A colleague sitting next to her said, "Tina, you design it, and I'll build it for you”. It was done in 48 hours.

"In 2010, we launched it as a free website and I announced it on my blog,” recalls Roth Eisenberg. “A few hours later, my colleague looked very pale because there were about 100,000 registrations and the server was about to crash." Many big tech blogs praised TeuxDeux. Now users pay a few dollars a year to cover the cost of server maintenance.

The Swiss designer has her daughter to thank for the company "Tattly,"external link she says. The badly designed removable tattoos that she used to help her daughter stick on her skin inspired her to create beautiful temporary tattoos with well-known illustrators. This, she says, would also have been impossible without the internet.

"The fact that I had so many blog visitors and Twitter followers was the key to success.” Today, Tattly tattoos are for sale in the New York Museum of Modern Art and in many places in Switzerland.

Despite the ease with which Roth Eisenberg navigates the digital world, she is pleased that her home constituency in the Appenzell town of Speicher continues to send her Swiss election and voting documents on paper and by post to New York.

Would she welcome the opportunity to vote digitally? "No," she says. Though she is a creature of the digital age, she doesn't trust e-voting, in part because of its record in the US.

Working on the newest baby

Roth Eisenberg is also conscious of the amount of time she spends online. "I'll never go completely offline, it's so much fun and part of my brand,” she says. At the same time, she wants to cut down on her internet surfing.

She is often asked if she misses designing.

"I still design, but now that means company concepts and teams,” she says.

Web design, however, is still close to her heart. She's just relaunched the Tattly website and CreativeMorning is undergoing a redesign. But she's also busy working on the latest digital baby: "CreativeGuild."external link She remembers how hard it was in the beginning to find a job in New York.

"That's why we're building this network for creative companies - a kind of LinkedIn with heart.”

"It's actually completely crazy, but we’ll manage somehow," she says with a laugh.

In this series, SWI swissinfo.ch portrays interesting Swiss personalities, either living abroad or with an international reputation, who recognized the potential of the internet early on and have used it successfully for their activities. The author, Dr. Sarah Genner, is a media researcher and digital expert. Her book “ON | OFF” was published in 2017.


Translated from German by Catherine Hickley 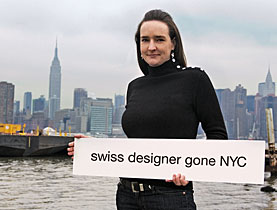 Swiss Miss blogs her way to the top

The most popular Swiss blog is actually located in the United States and run by Tina Roth Eisenberg, who describes herself as a "Swiss designer ...

The next generation Swiss design moves from functional to fun

Swiss industrial design has for decades been recognised for its robust functionality and simple elegance. But the playfulness and imagination of a ...

Othmar Ammann designed and built many of New York City’s iconic bridges and redefined the art of bridge-building.