Ever since canton Basel City decided to opt for online voting, momentum has been growing to enable the Swiss abroad to have their say electronically.

Sixteen cantons want to make e-voting possible, but the path to implementation is complex and time-consuming because of Switzerland's federal structure.

"It will be decades before internet voting becomes nationwide and at all levels. E-voting cannot be compared with e-banking," Hans-Urs Wili, head of a federal electronic voting project, told swissinfo.ch.

"Federalism leads to a mosaic – a patchwork of idiosyncratic and differing arrangements."

Switzerland has 26 cantons and 2,614 communes. Every canton and commune is essentially sovereign when it comes to organising elections and referendums.

Wili gives the example of the city of Bern, which has three different systems for the dispatch of voting materials and uses these in elections and votes at communal, cantonal and federal level.

"At the federal level alone, we have 26 different electoral systems. Added to that are the systems for cantonal and communal votes," he said.

E-voting is being introduced on a step-by-step basis. In January 2003 the 1,000 citizens of the Geneva commune of Anières were able to vote electronically for the first time on communal issues. In a next step, the cantons of Geneva, Neuchâtel and Zurich carried out successful e-voting trials on federal issues in selected communes.

In its evaluation of these pilot trials the government concluded in 2006 that e-voting would benefit the Swiss abroad in particular: for example the problem of ballot papers arriving too late, as well as high postal costs, would be eliminated.

But two conditions have to be fulfilled: those who wish to vote have to sign up with their embassy or consulate, and the cantons' voting registers must be harmonised. To date, this has been done by around 117,000 eligible voters based outside the country.

"Most cantons have, as required by law, harmonised their registers in the meantime," Wili said.

Organisation of the Swiss Abroad

The Organisation of the Swiss Abroad represents in Switzerland the interests of more than 700,000 Swiss expatriates. It informs them about what is ...

The basis for e-voting for the Swiss abroad is the changed law on political rights that has been in force since January 1, 2008.

In June 2008 non-resident Swiss from the canton of Neuchâtel were able to vote for the first time electronically. The premiere in Geneva took place on September 27 this year for the referendum on financing disability insurance.

Basel City will introduce online voting for the anti-minaret initiative on November 29 and Zurich will launch e-voting for non-residents in a pilot in 13 communes from June next year.

Basel City is the first canton not to have developed its own e-voting system – instead, it signed an agreement with canton Geneva in June this year to use the Genevan system. Working out the contract took eight months.

It was not just a question of information technology problems, said Barbara Schüpbach of Basel City at the signing. "Trust had to be won, because trust is the highest value in such a sensitive area [like voting secrecy]."

"Our strategy anticipates that the cantons can access what other cantons have prepared," said federal chancellor Corina Casanova, calling the pilot project between Basel and Geneva a milestone.

At present cantons Bern, Lucerne, Vaud, Uri, Obwalden and Nidwalden are also all working on a similar agreement with Geneva. In September another seven cantons decided to negotiate an accord with Zurich; trials are scheduled for the end of 2010.

That's being optimistic, according to Wili. "The letter of intent alone was 12 pages."

Ariane Rustichelli from the Organisation of Swiss Abroad (OSA) welcomed the developments, pointing out that e-voting has been one of its main preoccupations for years.

"Things have finally started moving in the past two years – when some cantons cooperate, others get carried along," she said.

The federal chancellery reckons that by the next federal elections in 2012 some Swiss abroad will be able to vote via the internet. Their aim is 50 per cent coverage by the end of that year.

At the end of 2007 there were 668,107 registered Swiss living abroad – an increase of 3.6% on 2006.
Almost a third of them are based in European Union member countries, mainly France, Germany, and Italy.
The largest community of Swiss expatriates outside Europe is in the US. Considerable numbers of Swiss abroad also live in Canada, Australia, Argentina, Brazil, Israel and South Africa.

The Council of the Swiss Abroad is made up of 160 representatives of the expatriate community and of public life in Switzerland.

The assembly, which meets twice a year, is the senior body of the Organisation of the Swiss Abroad (OSA).

This year's congress, which took place in Fribourg from August 22-24, focused on relations with the EU, notably the continuation and extension of the labour accord with Brussels.

High on the agenda of the council meeting were e-voting and planned budget cuts for the bi-monthly Swiss Review magazine.

Around 80% of Swiss expatriates have registered to vote have access to the internet.

Postal voting was introduced in 1992 and the introduction of electronic voting is scheduled for 2015, according to the Federal Chancellery.

The introduction of e-voting is expected to require an investment of up to SFr600 million ($548.5 million). Trials have been launched in three of the country's 26 cantons with the approval of the federal authorities.

Swiss expatriate voters hailing from canton Neuchâtel were part of a trial last June. A similar test is planned for those from canton Basel City next year.

Where do the Swiss Abroad live? 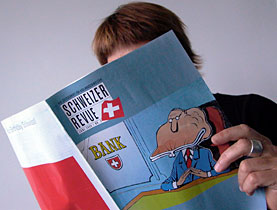 A foreign ministry decision to cut the annual budget of Swiss Review, the bi-monthly magazine for expatriate Swiss, has met with a mixed response. 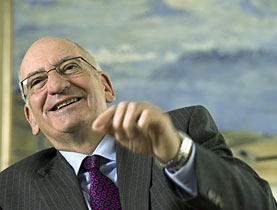 President Pascal Couchepin has praised the Swiss abroad for acting as an "impressive body of potential ambassadors". Addressing the contingent of ... 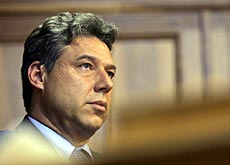 Tapping the power of the Swiss abroad

A Swiss politician is calling on the government to strengthen ties with the Swiss abroad. One Swiss citizen in ten lives abroad, but Filippo ...

And the winner is...

Images of the first few hours after Didier Burkhalter's election to cabinet. The 49-year-old from canton Neuchâtel was elected with 129 votes in ...

The right to vote