Swiss scientists say they have developed a new method to speed up the process of reproducing the Edelweiss flower.

The Agroscope research station in Changins said on Thursday that the plant's properties are in high demand by the pharmaceutical and cosmetics industries.

The scientists said the laboratory technique they had developed provided the breeders in a short space of time with the parent material necessary to grow the flower.

It involves placing sterile new shoots, each with an auxiliary bud, onto a culture, which is then fed with vitamins and growth agents needed for developing new shoots with leaves.

The test showed that depending on the genotype, four or five new sprouts were grown.

The challenge facing researchers up until now has been that potent Edelweiss varieties with the most sought after properties have had insufficient parent material needed for successful cultivation.

"It's like making a very fast photocopy of the flower, without playing with its genetic makeup," Công-Linh Lê, head of the in vitro department in Changins told swissinfo.

He said it was a similar technique already used to cultivate other alpine plants such as genepi and armoise.

"With this method, we derive a practical use from the plant produced from a culture, which should help protect it in the wild," he added.

The alpine flower, which grows above 2,000m, has been a protected species in Switzerland since 1962.

Extracts are used in sun care products and in anti-wrinkle treatments.

It is believed that the plant's antioxidant properties, a result of its exposure to strong ultra-violet light at altitude, means that it can counteract the human body's ageing process.

It has also traditionally been used in parts of Switzerland as a cure for diarrhoea.

There are around 41 types of Edelweiss, which originally comes from Asia.

It can be found in the Alps, the Pyrenees, Siberia, Afghanistan, the Himalayas, Japan and China.

It is often identified with Switzerland, and is used as the emblem of the national tourist board, as an army insignia and the name of a charter airline.

Scientists at the research centre, Agroscope, have developed a new technique for reproducing Edelweiss.

Agroscope is a division of the Federal Agriculture Office and comprises the five agricultural research stations in the country.

It is the goal of Agroscope to ensure an economically efficient and environmentally responsible agriculture in a socially sustainable manner. 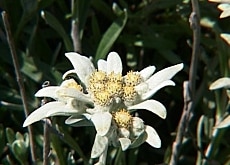 The edelweiss, the flower that symbolises the Swiss Alps, is being commercialised with great success and is ending up in anti-wrinkle creams and ... 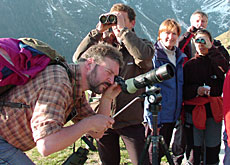 The job of most mountain guides is to get you up the mountain - but a new breed of guide will let you smell the flowers along the way. The goal ... 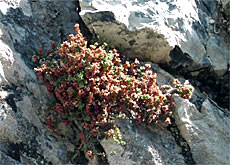 Melting glaciers are spectacular indicators of climate change, but when it comes to biodiversity in the Alps, scientists are more concerned about ...