Supporters and opponents of a proposal aimed at limiting access to guns have launched their campaigns ahead of a nationwide vote in February.

Switzerland has the highest number of arms per capita, with estimates varying between 1.2 million and 2.3 million. But exact data are not available as there is no central arms register.


Shaken by a number of high-profile killings over the past decade a broad alliance of human rights groups, churches, women’s organisations, trade unions and centre-left political parties has succeeded in forcing a nationwide ballot on an anti-gun initiative.

As in other countries many arms are in the hands of hunters, collectors and marksmen in Switzerland. Yet one of the peculiarities of the country is that members of the militia army keep their personal army-issue guns at home - in many cases even following completion of mandatory service.

It is a long tradition that carbines, pistols and even assault rifles - a standard infantry weapon - are kept in Swiss households.

For decades the high number of firearms in the public sphere appeared to give little cause for concern. The problems only came to the fore in the context of a series of attacks and family killings, including the attack by a lone gunman on a cantonal parliament in 2001 and the murder of a former Swiss ski star by her husband four years ago.

A recent survey by criminologist Martin Killias estimates that up to 300 people are killed by army-issue firearms annually in Switzerland.

A 70-strong coalition from civil society - backed by the centre-left Social Democrats and the Greens - last year handed in the necessary number of signatures for an initiative which seeks to set up a national arms register and ban army-issue firearms from private households.

It also aims to tighten regulations for licensed gun holders in an effort to fight possible abuse.

“It’s hard to understand why it should not be possible to set up a national database for a tool that can be used to kill - and that in a country where every cow, dog and parrot is registered,” said Jean-Pierre Monti of the union representing employees of the federal police force.

Jacques de Haller of the Swiss Medical Association adds that the initiative is not a pacifist smokescreen to weaken the army.

“We want to save lives, not do away with the army,” he said.

The slogan of the campaigners is, aptly, “Protect your family – vote yes to preventing gun violence”. Posters picture a teddy bear with blood dripping from a hole in its chest.

However, most parties in parliament, notably from the centre-right and rightwing, as well as the government have come out against the initiative.

Opening the campaign at the beginning of December, Justice Minister Simonetta Sommaruga said the current gun law was sufficient to protect the population against misuse  and that the initiative would be difficult to put into practice.

Yvan Perrin, a parliamentarian for the rightwing Swiss People’s Party argues that a central database is a first step towards banning firearms altogether.

Perrin adds that a ban to keep army-issue guns in households is tantamount to disarming soldiers and would seriously undermine mandatory shooting practice and traditional shooting competitions.

“Allowing members of the armed forces to keep their guns at home is a sign of respect by the state for its citizens,” Perrin said.

The initiative wants army-issue firearms to be stored in arsenals and discharged soldiers - except for licensed marksmen - would no longer be able to keep their guns.

But the exemptions leave Perrin unconvinced.

“If they insist on a strict application of the initiative hardly anybody will be able to prove that they do need the weapon,” he argued.

Less than eight weeks before the vote on February 13, the campaign still has to pick up but it has already become clear how emotional and controversial the issue is perceived to be by the public.

An interview with a former senior defence ministry official who came out in favour of the initiative prompted a wave of readers’ feedback – from both supporters and opponents.

Defence Minister Ueli Maurer felt it was necessary to respond publicly, alleging the retired official was out of touch with reality and lacked credibility.

Opponents of the initiative have dismissed a call by a United Nations committee to restrict access to firearms in Switzerland as an interference in internal affairs.

“The Swiss are responsible citizens and they decide themselves about Swiss laws,” a curt statement put it.

The initiative was handed in to the federal authorities last February with just over 106,000 signatures.

It was launched by a broad coalition of NGOs, and is backed by centre-left parties and the trade unions.

It seeks to enshrine in the constitution the establishment of a central database of firearms,  a strict licensing system for gun owners as well as a ban on stocking army-issue firearms in private households.

Swiss voters will have the final say on the proposal on February 13. 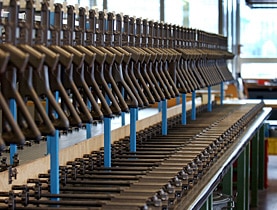 Proposals to break with the longstanding tradition of storing army weapons in Swiss homes have been dismissed by the country's parliament. ...