Oil is the leading source of energy in the world today, but its future is riddled with problems and experts disagree about the long term prospects for ‘black gold’, as swissinfo.ch discovered.

Historian Daniele Ganser is head of the Swiss Institute for Peace and Energy Research (SIPER) in Basel and chairman of the Swiss section of the Association for the Study of Peak Oil and Gas (ASPO).

Lawyer Niklaus Boss is managing director of the Swiss Oil Association, which represents the interests of the Swiss oil industry.

swissinfo.ch: When will “peak oil” – the maximum rate of world production – be reached?

Niklaus Boss: I don’t know. I imagine we are relatively close to the peak, and that without huge investment the amount extracted cannot be increased.

swissinfo.ch: What is likely to happen after “peak oil”?

D.G.: There will be more pressure on the environment. Because conventional oil has already reached its peak, there has been more investment in non-conventional oil over the past few years, but oil sands in Canada, deep sea oil in the Gulf of Mexico and shale oil from the United States cause a lot of pollution. Canada has even withdrawn from the Kyoto climate protocol in order to avoid millions of dollars’ worth of fines because of its oil sands.

Then you have the problem of wars breaking out over resources. For me, the 2003 Iraq war, which killed more than 100,000 people, was quite clearly an oil raid, just like the Libyan war in 2011, with more than 30,000 dead. And Sudan and the recently independent South Sudan are now fighting over oil fields. People are being killed for oil today. That’s a cause for concern.

N.B.: In the short and medium term I don’t expect any major impact. "Peak oil" isn’t like the Matterhorn: it’s more like the Jura. Once you have reached the highest point, you continue along the same level for quite a long time. You don’t get a sharp decline.

In the long term, oil will become more expensive. This will speed up the process we can already see in industrial countries, of moving away from oil. And emerging and developing countries will be slower and less enthusiastic about moving into oil.

swissinfo.ch: Let’s look 20 years into the future and compare the outlook then with today’s reality. What can we say about the production and price of oil?

D.G.: It’s actually the International Energy Agency (IEA) in Paris which is responsible for forecasting the supply and price of oil in 2030. But the credibility of the IEA has plummeted because it didn’t warn about “peak oil”, and only confirmed it in retrospect for conventional oil.

For a long time the IEA presumed that the supply of oil would go on increasing every year, because demand was growing. But nature shows that oil is a finite resource. So the IEA forecasts should be taken with a pinch of salt. I expect supplies to be short and prices high.

N.B.: The Swiss Oil Association has never made any forecasts, so I haven’t any documentation about this. In 2004 the IEA predicted a demand of 121 million bpd for 2030. Today it stands at just under 90 million. The IEA was also predicting an average price of $35 (SFr32.5) per barrel at that time. I don’t think anyone foresaw that prices would go up to $100 and more.

swissinfo.ch: The disaster at Fukushima triggered a world-wide change of direction as regards nuclear power. But there doesn’t seem to be much reaction to oil, despite the fact that it is linked not only with ecological disasters and environmental pollution, but also with global warming, speculation and war. Why is there less opposition to oil than there is to atomic energy?

D.G.: It depends what country you are in. In Nigeria there is strong opposition to oil. In Switzerland where at 55 per cent, oil accounts for the greatest proportion of the energy mix, people still don’t think about it enough. Nigeria, Kazakhstan and Azerbaijan, three of our major suppliers, are far away.

Nevertheless, it would  be wrong to say that people in Switzerland are indifferent about the oil wars in Iraq and elsewhere. Most do not want oil wars, nor do they want the environment destroyed. But many of them feel powerless. But there’s no reason why they should: we can install solar and photovoltaic cells on our roofs, insulate our houses, travel by train and electric vehicles and use cars which consume less than four litres per 100 kilometres.

N.B.: Nuclear energy is only one among many ways of generating electricity. Even without nuclear power we can still produce electricity and there won’t be any major consequences.

It’s not the same with oil. A petrol-engine more simply needs petrol. Otherwise you can’t drive it. If you switch from a petrol-engine car to an electric one, it’s just not as comfortable.

swissinfo.ch: Why is it so difficult to get away from oil?

D.G.: Because even today oil is still too cheap. And then it’s a wonderful energy source, easy to store, and with a high yield.

N.B.: Oil plays an important role in every department of our lives, and so it can’t simply be replaced. There is no other source that concentrates so much energy. Oil is easy to transport and store. It’s simple to use, safe and reliable. And it is also cheap.

swissinfo.ch: What other aspects of oil ought the public to know more about?

D.G.: The fact of “peak oil”, which has already been reached in several countries. The Swiss also need to know that they consume five litres of oil a day each, which is more than milk!

N.B.: People need to be aware of the importance of oil. Oil has been and still is the foundation of our prosperity – and will remain so for at least 50 years.

The important thing is to use oil efficiently. Prohibitions are not helpful. The problem of today’s society is not oil, but the huge hunger for energy that is leading to the CO2 problem.

swissinfo.ch: Where and how will we find the source of the energy we are going to need for our growing economy and population?

D.G.: No-one today knows. Demographic change is happening very fast. Two thousand years ago there were about 300 million people living on Earth. It took 1600 years to double this to 600 million. In 2011 we reached the record figure of seven billion people. And it had taken only 12 years to get from six to seven billion!

We need to learn how to solve conflicts without violence and to use renewable energies like sun, wind, water, geothermal heat, biomass and biogas.

N.B.: Fossil energies will go on being important for some time to come. In many cases there will be a switch from oil to gas.

The proportion of renewable energies will rise sharply. But I am certain that these will never be able to produce the same amount of energy that fossil sources do today. This leads to the conclusion that the biggest source of energy in the future has to be “saving energy”.

Oil is known as “conventional” when it is present in liquid form and comes to the surface naturally when extracted naturally.

The global output of oil is between 88 and 90 million bpd, each barrel containing 159 litres.

The 12 members of OPEC (Organization of Petroleum Exporting Countries) are responsible for 42 % of world production.

In 2011 global reserves of extractable liquid hydrocarbons in known fields were estimated at 207.8 billion tons. This was up 3.6% on 2010, largely because of technological progress.

Worldwide reserves would produce about 15 billion barrels, about half of which would be conventional.

The biggest reserves are in Saudi Arabia (35.5 billion barrels), Venezuela (28.8) and Canada (23.7).The ten countries with the biggest oil reserves have more than 83% of the world’s total. 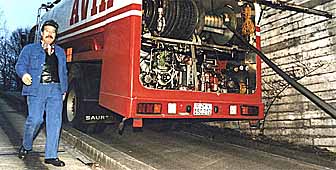 The impact of the rise in oil prices on economic growth and inflation is likely to be minimal, according to a study released on Wednesday by the ... 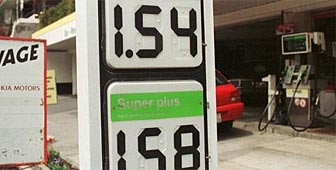 Import prices in Switzerland rose 6.4 per cent over the past 12 months ending in April. Much of that rise was due to the massive hike in the price ...

Swiss at odds over roadmap to nuclear-free future

One year after the Fukushima atomic disaster in Japan, Switzerland is facing a long road ahead towards its intended goal of a nuclear-free future.

Switzerland may not have its own oil reserves, but it does have plenty of forests full of wood that could be used to heat houses. More and more ...