Western European countries, including Switzerland, are queuing up to shift surplus stocks of the H1N1 flu vaccine after low public demand.

Amid controversy over its costly swine flu vaccine campaign, France said on Monday it wanted to cancel 50 million of the 94 million doses it had ordered because of over-supply. These latest moves could hit drugmakers’ profits, say analysts.

France had originally planned to spend €869 million (SFr1.3 billion) on 94 million vaccine doses, estimating that each individual would need two shots. But only five million French people out of a population of 65 million have been vaccinated and European health authorities have said one vaccine dose is sufficient.

The French move follows decisions by Switzerland, Spain, Germany and the Netherlands last month to review orders for vaccines to which they committed.

Switzerland, which has a population of 7.7 million, ordered 13 million doses of vaccine from GlaxoSmithKline (GSK) and Novartis, worth SFr84 million ($81 million).

In December the government said it planned to donate to the World Health Organization (WHO) or sell to other countries some 4.5 million excess doses of the swine flu vaccine due to the low uptake.

Only a small share of the initial order has been used. Most of the remainder is stocked by the federal and cantonal authorities, which say 15-30 per cent of the population have been vaccinated.

“Negotiations are ongoing with a view to selling or donating our stocks,” Jean-Louis Zurcher, Federal Health Office spokesman, told swissinfo.ch.

Zurcher refused to say which countries were interested and could not confirm whether Switzerland, like France, was in negotiations with pharmaceutical firms to cancel or return surplus vaccines.

“A lot of money was invested in the vaccines but the pandemic situation could have been much worse,” he added.

Elsewhere, Germany is also trying to offload surplus stocks and renegotiate orders placed during an early phase of the pandemic. It is due to start talks with GSK in Berlin on Thursday to try to negotiate a 50 per cent cut in the 50 million doses of the Pandemrix vaccine to be delivered.

The Netherlands announced in November that it would sell 19 million of the 34 million doses that it had ordered.

Spain is also seeking to return unused vaccines. It says its contracts with Novartis (22 million doses), GSK (14.7 million) and Sanofi-Aventis (400,000) include clauses that allow it to return surplus vaccines if they prove to be unnecessary.

A British health ministry spokesman told Agence France Presse on Sunday that sales of the vaccine were also being considered.

In light of the recent moves, analysts are increasingly gloomy about vaccine manufacturers' revenue and earnings prospects from the H1N1 pandemic.

“Longer term, the evident overcapacity with H1N1 should limit any multiple expansion related to income associated with pandemic flu," they added.

Sales of H1N1 vaccines have been a windfall for pharmaceutical companies. GSK is expected to be the single biggest beneficiary with anticipated sales of SFr3.7 billion by the end of the first quarter of 2010, according to analysts. Sanofi and Novartis have been forecast to earn an estimated SFr1.1 billion and SFr628 million, respectively.

The latest cancellations in Europe could reduce those numbers. But a spokesman for Sanofi said his company expected to replace the lost sales in France with orders from different parts of the world.

Glaxo declined to comment on the commercial impact of the latest developments but a spokeswoman said the British group was in discussions with governments about orders.

“Novartis will evaluate government requests on a case-by-case basis within the framework of the contractual agreements which we consider binding,” said Eric Althoff, head of media relations at the Swiss pharmaceutical giant.

The French government move came after intense criticism from politicians and scientists. The French opposition Socialist Party described the national campaign as an “extravagant fiasco” and demanded a parliamentary investigation.

Elsewhere, Council of Europe member states are considering whether to launch an inquiry into pharmaceutical companies’ influence on the global swine flu campaign.

The WHO's "false pandemic" flu campaign was "one of the greatest medicine scandals of the century," said German doctor Wolfgang Wodarg, chairman of the Council of Europe Parliamentary Assembly (Pace) Health Committee, who tabled the motion to be debated on January 25.

Swine flu appears to have peaked in western Europe. The number of cases in Switzerland continues to fall: at the end of December there were 418 confirmed cases of H1N1, 1,600 fewer than a month ago.

Since July 2009 there have been 12,826 confirmed cases, 430 people have been hospitalised, 77 of whom were in intensive care. Thirteen people have died of the flu so far in Switzerland.

But neighbouring countries in central and eastern Europe are still grappling with the pandemic. At present the virus is most active in Greece, Poland, Bulgaria, Serbia, Ukraine and Russia, according to the WHO.

Swine flu has spread to 208 countries and territories, according to the WHO, which declared an influenza pandemic in June. The virus has officially killed at least 12,220 people, but the true death toll is much higher and could take two years to establish, it says.

WHO Director-General Margaret Chan said last week it would take another six to 12 months for the pandemic to run its course.

According to Novartis and GlaxoSmithKline, side-effects are similar to those of seasonal flu vaccines: a swelling and redness at the injection site and fever, limb pain and headache.

This swine flu variation, termed H1N1, is an influenza A virus spread from person to person.

It contains DNA from avian, swine and human viruses. Although swine flu viruses normally infect only pigs, they do sometimes cross the species barrier to cause disease in humans, according to the WHO.

It is passed from human to human by sneezing, coughing or by hand contact. The WHO says swine flu is not transmitted to people eating properly handled and prepared pork or other products derived from pigs.

New flu strains can spread fast because no-one has natural immunity and a vaccine can take months to develop.

The swine flu pandemic forced pharma groups to develop vaccines as quickly as possible but the market for such disease-resistant products has been ... 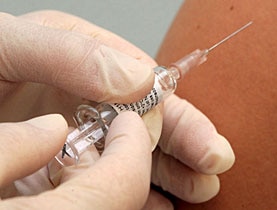 Vaccinations against the H1N1 flu virus in Switzerland will be carried out in two phases beginning in mid-November, health authorities said on Friday. 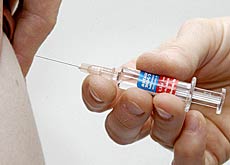 Swiss drugs giant Novartis could invest up to $600 million in a US-based facility to develop a new generation of vaccines based on cell culture ...

Switzerland is not immune to swine flu. Switzerland confirmed on Thursday its first case of swine flu, saying a young man returning from Mexico ...