The world number one defeated Russia’s Igor Andreev to win Sunday's final at the Swiss Open in Gstaad.

It was his seventh appearance at the clay court Swiss Open and his first ever tournament win in Switzerland.

The Basel player's latest title comes just a week after he lifted the Wimbledon trophy for the second year in a row.

"I always believed that I could win in Switzerland, and this time it worked out," Federer said.

"It's not easy to come straight from Wimbledon. To adapt to clay from grass is extremely difficult," he added.

Last year he lost in the final at Gstaad against Jiri Novak who was eliminated this time around in the quarter-finals.

Federer held the upper hand in the first two sets of the match against Andreev, despite clearly being exhausted. The Swiss arrived in Gstaad on Monday, 24 hours after winning Wimbledon.

The third set also looked to be going Federer's way, but Andreev broke back to draw level at 4-4 and eventually took the set 7-5.

However, it was all back to normal in the fourth set as Federer came back to life, and a series of superb returns gave him three championship points on Andreev's serve at 5-3.

Spurred on by his Swiss fans, the 22-year-old wrapped up the match at the second attempt, when the Russian hit his return into the net.

This year top-ranked Federer has notched up seven tournament victories, including the Australian Open, Indian Wells, Hamburg and Halle.

He is also the first Swiss in more than 20 years to win the men's singles at the Swiss Open after Heinz Günthardt’s success in 1980.

The match was won by top-seeded Leander Paes of India and David Rikl of the Czech Republic 6-4, 6-2.

It is the first major tournament win on home soil for the two-time Wimbledon champion.
It is Federer’s seventh title this year, after Wimbledon, the Australian Open, Indian Wells, Dubai, Hamburg and Halle.
Federer is the first Swiss tennis player to win Gstaad since Heinz Günthardt in 1980. 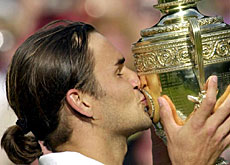 Federer makes it two in a row at Wimbledon

Switzerland’s Roger Federer has taken the Wimbledon tennis crown for a second successive year, beating Andy Roddick of the United States in a ... 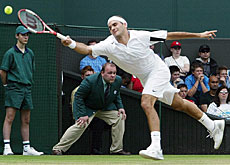 Federer serves up ace for charity

As Roger Federer seeks to defend his Wimbledon crown this week, the Swiss tennis star’s charity is launching its first overseas project. The ...