Ferdinand ‘Ferdy’ Kübler, the first Swiss to win the Tour de France had died at the age of 97. He was the oldest living overall winner of the most famous cycling road race.

The cycling legend, who was named the "Swiss sportsperson of the century" in 1983,  died in a Zurich hospital on Thursday. He was admitted on account of a severe cold.

Cycling The life of Ferdy Kübler

Switzerland's former cycling champion Ferdy Kübler died at the age of 97 on Thursday. These historic images show some of Kübler's greatest ...

According to him, his greatest regret was not winning the Tour de France in 1949. His bike tyre got punctured while he was in the lead. He had to wait 20 minutes until a rescue vehicle turned up because his own vehicle had met with an accident.

He had rivalry going on with fellow Swiss Hugo Koblet, who became the first non-Italian to win the Giro d’Italia in 1950 and went on to win the Tour de France the year after Kübler’s victory. Kübler and Koblet remain the only Swiss to have won the world-famous French road race.

Kübler retired from cycling in 1957. The mantle of the oldest living Tour de France winner now passes to Frenchman Roger Walkowiak, who won the race in 1956. He is 89 years old.

They came, they saw, they cycled. Stage 16 of the Tour de France has arrived in Switzerland. 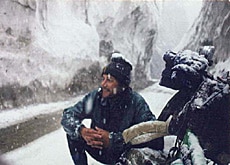 Around the world in seven years... on a bike

Swiss cyclist Claude Marthaler only ever intended to cycle around Japan - but he ended up staying on the road for seven years. His world tour was ...