Swiss workers are the most content in Europe and are pipped only by Mexicans when it comes to job satisfaction, according to a comparative international study.

Only half of Swiss worker think they get paid enough, but this is more than any other European country. Some 85 per cent were "very satisfied" (54.5 per cent) or "satisfied" (30.5 per cent) at the workplace.

The findings of German consultancy group geva Institut back up the results of other polls in recent years that show the Swiss get more out of their work than most other countries.

Some 80 per cent get on with their colleagues and nearly three-quarters like their boss.

"It is in the general nature of the Swiss that they are highly motivated to go out to work," Dieter Kissling, leader of the Swiss Institute for Work Medicine, told swissinfo.

"Employees here are given a lot of responsibility and flexibility that allows them to shine in the workplace. There is a greater tendency to work on large complex projects rather than screwing in the same screw a thousand times.

"The atmosphere in the workplace is generally good and workers have good chances to advance their careers and their own personal development."

The job satisfaction study shows Switzerland lying in second place behind Mexico – a result that surprised both the geva Institut researchers and Kissling – with the United States coming third. The next highest-ranked European country was sixth-placed Germany.

Japan was found to have the most disgruntled employees, coming last of the 25 nations surveyed.

Swiss employees were more satisfied than their European counterparts with social development and the atmosphere at work, training and advancement opportunities and work-life balance.

The positive Swiss scores compared with other European countries did not surprise Kissling.

"Compared with Sweden or Germany, for example, there is a much lower rate of absenteeism, which is directly related to job satisfaction," he said. "The workplaces in other European countries tend to be much more controlling than Switzerland."

Nearly two-thirds of those surveyed in Switzerland considered their workload to be appropriate. However, a survey conducted two years ago by a recruitment services consultancy found that a third of Swiss workers are stressed – a higher proportion than anywhere in Europe.

Kissling believes that stress is a growing problem, not just in Switzerland but around the world.

"We have a very high workload that leads to high stress levels and consequent psychological problems," he said.

"But this is a worldwide phenomenon and Switzerland is already successfully adapting the workplace to meet this demand. Therefore, I would expect Swiss workers to remain comparatively happy in the future."

The study by German consultancy group geva Institut measured job satisfaction by interviewing 11,000 employees from 25 countries – 308 participants were from Switzerland.

A job satisfaction study by the European Foundation for the Improvement of Living and Working Conditions earlier this year placed Switzerland in fourth place behind Denmark, Britain and Norway in a European league table.

In that survey, 91% of Swiss workers expressed satisfaction with their jobs and their work-life balance. Only 12% said their work could be better, compared with a European Union average of 20%.

A 2005 survey by recruitment consultants Kelly Services found 53% off Swiss happy with their work and 48% feeling that they were paid enough. 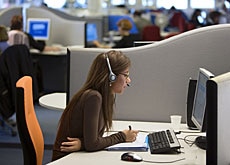 Switzerland ranks among the top countries in Europe in which to work, according to the latest results of a survey of 31 nations conducted every ... 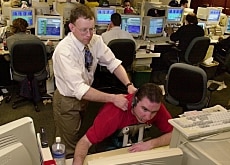 The Swiss and the Swedes are the most stressed out workers in Europe, according to a survey published on Tuesday. More than one third of Swiss ... 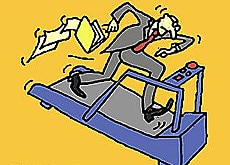 The quest for happiness is not to be found with an increasing salary or brand new car, economics professor Mathias Binswanger argues in a ...