A court in Italy has found Swiss industrialist Stephan Schmidheiny, along with his Belgian business partner, guilty of the deaths of hundreds of workers.

Convicted of involuntary manslaughter in Turin on Monday, the two men were each sentenced to serve 16 years in prison. In addition, they will have to pay millions of euros in punitive damages.

Schmidheiny and Jean-Louis Marie Ghislaine De Cartier were the majority shareholders in the Eternit Genova company, which owned four asbestos factories in Italy.

In a statement following the ruling, a spokesman for Schmidheiny announced his client would appeal the verdict. He described the ruling as “completely incomprehensible”.

The hearing on Monday attracted hordes of journalists as well as several mayors from around Italy. Neither Schmidheiny nor Cartier were present.

According to the court, more than 3,000 people died from the consequences of asbestos dust in those factories. Schmidheiny and Cartier were accused of knowing about the dangers of asbestos but not taking the necessary measures to protect those who came into contact with it.

The Swiss-based construction company was blamed for spreading asbestos fibres over much of northern Italy by allowing dust from the production of roofing materials and pipes to blow around.

Exposure to asbestos causes mesothelioma, a rare and lethal cancer that occurs in the lining of the lung known as the pleura. In 1984-1988 the Swiss Cancer Register recorded 342 cases; 20 years later the figure had more than doubled to 846 cases in the period 2004-2008.

The Swiss occupational health insurer, Suva, estimates that between 1939, when asbestosis was first listed as an occupational illness, and the beginning of 2030, there will be 4,500 deaths in Switzerland from the mineral.

Yet for many victims and their families, bringing proceedings against companies or their former owners seems a lost cause. It can take 40 years for the disease to develop.

In 2008 the Swiss Federal Court threw out three charges of manslaughter, murder and bodily harm brought by relatives of a victim against, among others, the former owners of Eternit AG Thomas and Stephan Schmidheiny. The country’s supreme court argued that the statute of limitations of ten years had passed.

The “wonder mineral”, as it used to be known, reached its peak in the late 1970s, with around 3,000 products using asbestos on the market.

Switzerland was an important asbestos centre. The Schmidheiny family’s Eternit Group had its headquarters at Niederurnen, in canton Glarus.

In its heyday, the holding Schmidheiny Amiantus controlled factories in 16 countries, employing 23,000 people.

The Eternit offices also housed, from 1929, SAIAC, the cartel of cement-asbestos producers.

Eternit had two sites in Switzerland: Niederurnen and in Payerne.

A major trial opens in Italy on Thursday in which a Swiss industrialist is accused of co-responsibility for the deaths of hundreds of workers. ...

Dying from asbestos… and having to prove it

The number of cases of illness due to asbestos is on the rise, with hundreds of deaths expected in Switzerland in the next years. But for those ... 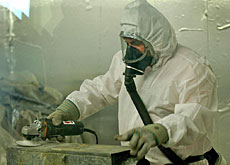 Chrysotile asbestos will remain off a global "watch list" of toxic substances for at least two years after countries led by Canada blocked ...

Risky building Too many workers get injured

Risks of injury for construction workers, especially those employed temporarily, are too high in Switzerland. Every year one worker in five on a ...