The Swiss authorities have confirmed that a Swiss women has been kidnapped in Mali. Reports suggest that the woman, reportedly a Christian missionary, had been abducted by gunmen.

The Swiss foreign ministry in Bern said on Friday evening that it was aware of the kidnapping.

"The Swiss citizen is the person who was once before kidnapped in Mali in the spring of 2012," a foreign ministry statementexternal link said.

A taskforce has been created by the ministry's Crisis Management Centre (KMZ), which handles crises and emergencies affecting Swiss nationals abroad. The statement added that all the relevant Swiss authorities were working to achieve "the release of the Swiss citizen in good health".

It is unclear who carried out the abduction, however; no group has claimed responsibility.

A Mali government official told the AFP news agency that gunmen had kidnapped a Swiss citizen in her home in Timbuktu.

A Malian security source told the agency armed men had gone to her home on Thursday night, "knocked on the door, she opened, and they left with her."

In 2012, Islamist fighters in northern Mali kidnapped Beatrice Stöckli, a Swiss woman working as a missionary in Timbuktu, and released her days later. A resident of Timbuktu who knows Stockly told Reuters it was she who was kidnapped overnight.

French forces drove Islamist fighters from major urban centres in 2013 but the fighters remain active in the West African country and have recently intensified their insurgency.

France continues to fight militants in Mali and elsewhere in the desert band known as the Sahel with a 3,500-strong counterterrorism force called Barkhane. There is also a United Nations peacekeeping mission.

The Swiss foreign ministry statement added that it had advised its citizens since December 1, 2009 not to travel to Mali because of risk of abduction. "After the kidnapping of 2012, the ministry had pointed out to the affected Swiss national the high personal risk in Mali ... and strongly discouraged her from another stay in Mali," it said.

The Swiss woman kidnapped in Mali nine days ago has been freed. She was released in good health on Tuesday, according to the Swiss foreign ministry. 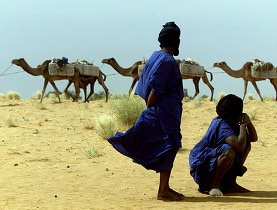 The Swiss national held hostage by al-Qaida extremists in Mali has been set free, the Swiss foreign ministry has confirmed. The man was seized ...

Switzerland is trying to leverage its 35-year history in Mali, a priority country for Swiss development aid, to mediate between the government in ...

A jihadist group has claimed responsibility for the kidnapping of a team of workers from the Swiss-based International Committee of the Red Cross ...