A report by a Swiss non-governmental organisation has accused Geneva police of heavy-handedness in its treatment of black people.

The study comes less than two weeks after an internal police investigation was launched over a racist stunt carried out in public by three Geneva officers.

According to the Swiss-based anti-racism platform, known as “CRAN”, police brutality and racism against blacks is on the rise across the country.

The group, which based its report on eyewitness accounts of alleged abuse, said the problem was particularly acute in Geneva, where an anti-drug campaign was launched in 2002.

“More and more, we’re seeing young blacks, especially foreigners, being targeted by the authorities as part of a the crack-down on drug traffickers,” said CRAN’s secretary general, Kanyana Mutombo.

“Little or no effort is being made, however, to distinguish between real criminals and honest citizens,” he told swissinfo.

“Anyone with black skin is in danger of being singled out and subjected to some form of humiliation or violence,” added Mutombo.

When contacted by swissinfo, the Federal Police Office declined to comment on the allegations, saying that it had did not have blanket authority over cantonal police services.

But Geneva’s chief of police, Urs Rechsteiner, confirmed that the introduction of the canton’s anti-drug taskforce in 2002 had resulted in a higher number of arrests among Africans.

According to Rechsteiner, 75 per cent of people detained in Geneva on drug-trafficking related charges during the first three months of 2004 were asylum seekers.

“The most frequent places of origin are Guinea, Mali and Liberia,” he said. “And this phenomenon of traffickers coming from Africa… has led to a perception that they are being targeted by the police.”

He also insists that Geneva’s police force has adopted a series of measures over the past few years to prevent racism in its ranks.

“These allegations aren’t new,” Rechsteiner told swissinfo. “And we’ve taken steps to provide training on human rights and multicultural awareness to our officers and to internally investigate any abuses.”

But the effectiveness of the police department’s sensitivity training was called into question on August 13, when three Geneva officers carried out a racist gag at the city’s main train station as part of a bachelor party stunt.

According to eyewitnesses, two of the officers faked the arrest of their soon-to-be-married colleague, who was disguised as a “dark-skinned Brazilian in an ‘afro-style’ wig”.

The two reportedly then handcuffed their colleague, tied him to the back of their police car and forced him to run behind the vehicle until they reached the station’s police office.

Rechsteiner immediately opened an internal investigation into the matter, describing the incident as “intolerable”.

CRAN said the gag was proof that the authorities had allowed an “intolerable level of laxity to reign” in the city’s police force.

The group claims to have received at least six reports of black youths being forced to strip and to submit to body-cavity searches in public, including two such incidents at the end of June in Geneva.

Rechsteiner told swissinfo that Geneva’s prosecutor had been asked to look into those two incidents, but that he was not aware of similar cases in other cantons.

“We are taking these allegations seriously and as soon as a witness brings something to our attention, we respect proper procedure and take any necessary disciplinary actions,” he said.

“It should also be made clear that pat-down searches over clothing are allowed but that full-body searches are prohibited in public,” added Rechsteiner.

CRAN is not the only human rights watchdog to have criticised the Swiss authorities of heavy handedness in recent months.

In its annual 2004 report, released this May, Amnesty International also condemned the country’s police for using excessive force against foreigners and asylum seekers, including the mistreatment of detainees in cantons Geneva, Zurich and Bern.

“This is all very disturbing,” said Mutombo. “And what’s worse is that Swiss politicians have turned a blind eye to the abuse.”

“We’ve alerted the federal authorities but there has been no political reaction whatsoever,” he added. “No one is willing to admit that this is a nationwide problem and it’s getting worse.”

A Swiss-based NGO, “CRAN”, has accused Swiss police of heavy-handedness towards black people

In a recent report, the group criticised Geneva police for targeting African asylum seekers as part of the city’s crackdown on drug dealers.

CRAN has also published a brochure aimed at informing foreign minorities of their legal rights in Switzerland. 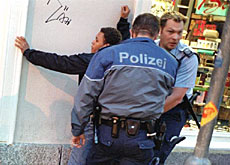 Amnesty International has condemned Switzerland’s police for using excessive force against foreigners and asylum seekers. In its 2004 report, the ... 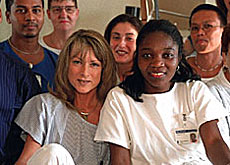 Switzerland has been criticised by a European body for failing to make sufficient progress in combating racism and intolerance. The report ...