Critics of the International Space Station (ISS) often describe it as being "Frankenstein's monster".

They claim it is well over budget and behind schedule and would be better off being scrapped entirely.

It was conceived as a an international project, led by the United States and includes Russia, the European Space Agency (ESA) - of which Switzerland is a member - Canada, Brazil and Japan.

Its purpose is to conduct state-of-the-art scientific experiments in space.

It was expected to cost around $18 billion (SFr24 billion) and be fully operational by 2003. However, the opening time has now been postponed to 2011, with costs set to rise to $100 billion.

Swiss astronaut, Claude Nicollier, admits that the station has run into a lot of difficulties and but says the project is definitely worthwhile.

swissinfo: Is it fair to describe the ISS as a "white elephant"?

Claude Nicollier: I know this is that's the perception of a lot of people have of the ISS, but it's much more than that.

First of all, it was a huge exercise in realising a very complex endeavour far away from Earth. It has a multinational flavour with the US and Russia being the main partners - but the 11 states of the European Space Agency (ESA) Canada, Japan and Brazil also being involved.

The purpose of this programme was in part to carry out research in micro-gravity. A lot of these experiments cannot really be done on Earth, they have to be carried out in space.

Another key goal is develop technologies that will be used for further exploration of humans in the solar system.

For instance, all the technology related to the recovery of water - recovering water from urine and recycling it from perspiration so that we won't have to transport too much water from Earth to the station.

These technologies are not trivial and they are absolutely essential before we have manned missions to Mars for example.

swissinfo: But are they technologies that can also be applied on Earth?

N.C.: It's mainly for further exploration of space but there are also technologies that can be applied back here. But the purpose of the programme is not directly to serve the material needs of people on Earth.

This is not a programme of space utilisation, such as communications or navigation satellites, or those used to observe the earth and provide better weather forecasting, which are of course useful for humans.

This is more an exploration programme and when you do exploration the benefits will be long-term - very long-term.

swissinfo: What sort of contribution has Switzerland made to space exploration?

N.C.: Switzerland is well thought of within ESA. It's a small country in terms of its gross national product (GNP) compared to the combined GNPs of all the member states including the big ones like France, Germany and Italy.

But it is very respected and one of the member states that started ESA. Although politically we have a hard time joining Europe, in scientific, technical and research organisations we play an important role. 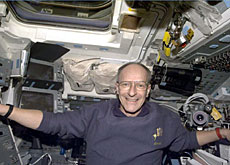 Europe's first ever mission to Mars blasted off this week, with Switzerland playing a key role in the European Space Agency's project. To mark ...