A Swiss village has laid claim to Barack Obama’s roots – the latest European location to throw its name into the multicultural mix that is the United States president.

After three months of combing through town records, a Swiss archivist has traced Obama’s family tree to a villager from western Switzerland.

While the ancestor in question – Hans Gutknecht – was already confirmed by archivists to have lived in the French Alsace village of Bischwiller in 1720, experts suspected he might have originated from Switzerland. Now, his baptism record has been unearthed showing he was born in the village of Ried bei Kerzers.

A rustic German-speaking village near the capital Bern, Ried bei Kerzers is quintessentially Swiss. Set among wheat fields, its quiet streets are lined with huge, long-roofed farmhouses and pristine gardens.

Still largely a farming village to this day, it boasts one shop, a church and a lone petrol pump.

In the past the Gutknecht name was common in the region around Ried bei Kerzers and when speculation arose in recent years about a possible tie to Obama, a number of local Gutknechts came forward claiming the president as their own.

It was the village council that decided to end the “mystery” forever, by putting its genealogist, Hans Herren, on the case. Through a process of elimination of different Gutknecht branches he traced the line down to a family in nearby Fräschels. The family tree ends with their 12-year-old boy, Obama’s distant cousin.

At the same time, Herren tracked down the 1692 baptism certificate for one Hans Gutknecht – Obama’s seventh-great grandfather on his mother’s side. He emigrated to France in the early 1700s and his son later moved to Pennsylvania in the US, changing his name to Goodnight. The findings have been authenticated by the Fribourg cantonal archive department.

The research and the resulting family tree have been assembled into a bound press pack, ready for a media launch by the village to present the findings on July 13. The American embassy in Bern was invited to the event but declined saying they could not officially attend as it was a private matter, says Heinz Etter, president of the village council.

“Then I wrote to the president. The council decided it wanted to make him an honorary citizen and wanted to present the document to him,” says Etter over coffee in the village’s only cafe. Needless to say, there has been no reply from Washington.

Elizabeth Thomas is another resident in the cafe musing over the impact of their Obama ties.

“It’s a funny thing. People are talking about it. Some believe it, some don’t,” she says. Overall, it is having a positive effect in the village, she adds.

“In a village like this, you can imagine that people are on the right politically, when you talk about black people and so on. But when you say, maybe you have a connection to Obama, then…” her voice trails off.

“I’m proud,” says another resident, Martin Schindrig, outside his glass atelier on the main street. “I think he’s a great guy. I know that people in the village were really happy about his election. That was only possible in the US. I can’t imagine having a black president here.”

“America is a land of immigrants, it’s nice that it’s still the case,” he continues.

Obama records details of some of his Kenyan roots in his book, Dreams of My Father, and in recent years the family tree on his mother’s side has been traced back to Germany, France and Ireland, with each new excited find provoking references to Obama wearing lederhosen or jokes about his name being O’Bama.

Ried bei Kerzers’ discovery was picked up by Alain Chardonnens, a pro-Obama history lecturer from Fribourg who wove the development into a book he has written on the president’s first 100 days in office.

He told swissinfo.ch that further evidence of Obama’s Swiss roots would help silence opponents who make an issue out of his origins and conspiracy theorists who insist he was not born within the US.

“It was very important for him and for the Democratic Party in 2008. The Republicans attacked his Arab name, Hussein. The Democrats also wanted to show the white voters that Obama also had white origins and that he was an American like everyone else.”

Today, the discovery of his Swiss roots will be “good news” for the Democrats, he noted. “We are coming up to the [US election] mid-terms. The Tea Party is still attacking Obama. His birth certificate is still under attack. This brings new proof that he is an American just like everyone else.”

But he says that’s where the benefits will probably end.

“I think for the village residents it is a great source of pride. But besides that, what else can you do about it?” he asks, joking that the village could erect a statue of Obama in the village or try to become a twin town with Washington DC.

“There certainly won’t be any economic impact. There will not be any political impact. It just flatters the pride of the residents.”

According to Heinz Etter, the village’s 1,064 residents are taking their newfound fame in their stride.

“[After finding out about the connection] we went back to work. We aren’t going to stop working because of this. Nothing has changed.”

Hans Gutknect (1692-1762) was born in Ried bei Kerzers and baptised in nearby Murten. He married Anna Barbara Kiefer. They moved to Bischwiller in France and had a son called Christian (1722-1795) who later emigrated to the United States, married Maria Grünholtz and changed his name to Goodnight.

Next in line was their son Samuel Goodnight who married Magdalena Berkeimer and had a daughter named Catherine who married Jacob Dunham.

The grandson of Hans Gutknecht’s brother Peter had five children, one of which, Benedict, had a son Gottlieb, whose great-great granddaughter Dora married Albert Meyer and had a son, Stefan Meyer, whose grandson in turn is the youngest member of the family line.

The Fribourg cantonal archives certified the findings, stating that they resulted from “solid and well documented work” by Hans Herren.

Obama has a half-sister Maya Kassandra from Ann Dunham's second marriage to Lolo Soetoro. Obama developed a close relationship with his Hawaiian-based maternal grandparents Madelyn and Stanley Dunham after moving to the island from Indonesia.

He has several half-brothers and sisters in Kenya: Malik, Abo, Auma, George Hussein Onyango and Bernard Obama and Mark and David Ndesandjo. He has three half-uncles, Said, Yusuf and Omar Obama and a half-aunt Zeituni Onyango.

In his book, Dreams of My Father, Obama retraces his Kenyan roots, and writes about travelling to the country to meet his relatives and learn more about his ancestors. There he hears stories about his great-grandparents, Obama and Nyaoke, and great-great grandfather Opiyo. 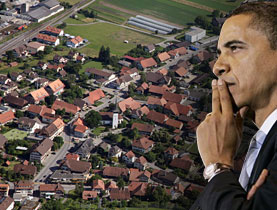 The findings earlier this year that Barack Obama may have some Swiss blood in his veins, whether true or not, indicates a growing interest in ... 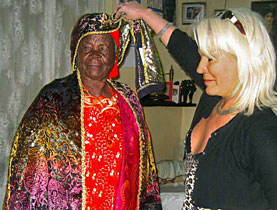 Choosing an outfit for the biggest global bash of the year involves careful planning and - if you're Barack Obama's grandmother – a little help ... 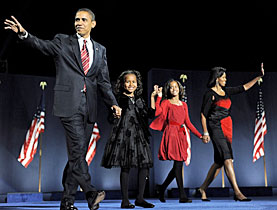 Obama elected next US president

Democrat Barack Hussein Obama has been elected the first African-American president of the United States in a contest that shattered racial barriers.

Barack Obama has become the 44th US president.