It can take as little as a broken pair of glasses to cause financial hardship for the 45,000 elderly people living on the poverty line in Switzerland.

For socially disadvantaged pre-schoolers, missing out on the chance to attend a play group can be the first of a chain of missed opportunities that will ultimately lead to poor employment prospects and low income for life.

A group of seven Swiss agencies with the common goal of combating poverty joined forces in Bern on Friday to present their strategies and wish lists for 2010, which has been declared European Year For Combating Poverty and Social Exclusion.

Werner Schärer of the age action organisation Pro Senectute told swissinfo.ch that pensioners living in poverty was a hidden problem.

“Our social workers helped out 35,000 people last year, half of them with financial problems, and yet the image of retired people in the media is of a wealthy group who can afford a very comfortable lifestyle.”

Those in need of help are more likely to be women, people living alone and immigrants, according to Schärer.

Pro Senectute plans to go on the offensive next year.

“On a political level there is a range of measures that we are pushing for. One is the ceiling for rental expenditure which is taken into account when calculating income support. It has not changed since 2001 and of course rents have risen significantly since then,” Schärer said.

"There are hardly any cheap apartments on the market and in any case moving is out of the question for many of our clients. So people end up funding the rental shortfall from their budget for basic needs, which means they have to cut back.”

Ruedi Meier, president of the social policy unit of the Swiss Towns and Cities Initiative, made the case for extending income support to low income families, a proposal that will be voted on by parliament next year.

“We have children’s allowance and an allowance for students, but what is missing a social policy instrument to better support the working poor so that they don’t have to rely on social welfare,” Meier told swissinfo.ch.

“Income support is already available for elderly people on small pensions and those in receipt of disability allowances. We are now calling for income support for low-income families,” he added.

Meier highlighted the fact that immigrants were over-represented among the unemployed and those relying on social welfare payments.

“This is a reflection of a long-term trend of poorly qualified immigrants coming to Switzerland. There is a clear relation between the level of qualifications and poverty,” he said.

“However in more recent years, arrivals from the European Union are more likely to be highly qualified professionals and the unemployment statistics and other poverty indicators for them are the same as for the Swiss.”

It is particularly important that children of poorly-skilled immigrants have good access to education, according to Meier.

“ Here in Switzerland we have a problem that a very low proportion of children from an immigrant background are making it to higher education. Our schools segregate very strongly according to social class and nationality.”

The most important poverty prevention measures must start early. “It is extremely important for children to learn the local language as early as possible in play groups or day care.”

Primary schools that provide meals at lunchtime and after-school supervision also favour integration because children are more exposed to the national languages in a variety of settings, he said.

9.3% of Swiss children live in relative poverty, according to the OECD.

12% of pensioners need income support to make ends meet with up to a third of them - 45,000 – still living in poverty despite this assistance.

10% of single parents are "working poor". Their low pay means they remain in relative poverty despite working a regular working week.

“If only” – Mobile exhibition featuring videos of people relying on social welfare payments speaking about their lives. Aims to put a face on the reality of poverty in a rich country. Starts in Bern on April 13.

National day focusing on the situation of elderly migrants. Organised by the National Forum Age and Migration, Pro Senectute and the Swiss Red Cross. November 30.

During its 70-year history, Swiss Labour Assistance (SLA) has assisted refugees and disaster victims, supported workers' rights and helped the ... 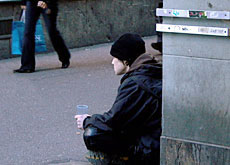 The number of people receiving social benefits in Switzerland has increased again, with a growing proportion of youngsters dependent on help from ... 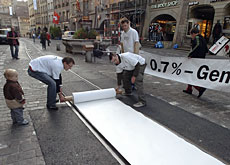 Swiss President Micheline Calmy-Rey says that it is "not normal" for people to be suffering poverty in "a rich country" like Switzerland. She ...