In April the prestigious Swiss federal technology institute ETH Zurich announced it was investigating one of its professors following accusations of publication fraud. Academic misconduct is nothing new, but the Swiss have only recently taken a coherent approach to investigating it.

The ETHZ case involves a biology professor who was anonymously accused in the online forum PubPeerexternal link of having manipulated images that accompanied articles he had co-written and published. According to the French National Center for Scientific Research (CNRS), which funded some of the research, around 30 articles are involved.

On April 9, ETHZ stated that it had formed an investigative committeeexternal link to evaluate the allegations published on the websites PubPeer and Retraction Watchexternal link since January 2015. Until the investigation is completed, it can’t comment on the process, a spokeswoman told swissinfo.ch. CNRS is also conducting a separate investigationexternal link.

Falsification (adapting or distorting) and fabrication (inventing) of data are two forms of research misconduct. There are many more. These range from plagiarism (using someone else’s text  as your own) to false authorship (taking credit for work you haven’t done) to not declaring competing interests – such as the fact that your study is being sponsored by the company that sells the product you’re studying.

One of the biggest cases of publication fraud in Europe to date involved a German anaesthesiologist named Joachim Boldtexternal link. Following a lengthy investigation Boldt was fired from his professorship at the Klinikum Ludwigshafen and 88 of 102 reports he had published in scientific journals were withdrawn. Boldt had apparently been falsifying data as far back as 1999.

In 2009 an analysis of 21 published  surveysexternal link conducted in a range of countries found that almost 2% of the scientists surveyed admitted to having fabricated, falsified or modified data or results at least once in their career, and 34% admitted to other questionable research practices.

Why would scientists risk jeopardising their careers by  fabricating or falsifying research? “Like in any other area of human activity – for example, sports, where you have doping – people want to excel at what they do,” says Lausanne-based editorial manager Mirjam Curno. Much unethical behaviour has developed as a result of incentives set by funders, by institutional assessment boards and by promotion committees, according to Curno.

Researchers are tempted to engage in misconduct because they “are under immense pressure to secure funding, due to their short-term contracts, due to grants expiring on a regular basis, and because they compete for tenureship positions, which are quite few in number”.

Is publication fraud a common problem in Switzerland?

“Not more than anywhere else,” says law professor Kurt Seelmann, who chairs the Swiss National Science Foundation’s (SNF) Commission on Research Integrity. “But it is, as we see, a problem. There are a lot of suspected cases we have to follow up.”

Publication fraud has likely existed for decades, if not centuries. But it’s only recently that Swiss research institutions have developed guidelines for investigating suspected cases.

“Before 2009 we didn’t formally have a procedure,” says Susan Killias, general counsel for the Swiss Federal Institute of Technology Lausanne (EPFL). “I’ve been here since the year 2000, and we never heard about it.”

The SNF Commission on Research Integrity was founded in 2013.

“Scientific misconduct naturally existed before that, and was investigated, but we had the feeling that we needed a more systematic approach, and that a special committee should be created,” says Seelmann.

As awareness of misconduct has developed, universities, scientific journals and funding agencies worldwide have started to become proactive.

“We really, really believe that punishment is one thing, but the most important thing is prevention,” says Killias. “We regularly publish reminders on the website or we send emails to people to remind them about their duties.”

Since 2009, when the EPFL first instituted a formal procedure for dealing with research misconduct, the school has had only three cases involving professors – two of which were inconclusive – and three or four involving other persons, Killias says. “When you think that each year we publish maybe 2,000 articles, it’s really nothing.”

For an organisation investigating a potential case of misconduct, it can be  useful to have support and advice. The international Committee on Publication Ethicsexternal link (COPE), with almost 10,000 publishers and journal editors as members, produces guidelines, discussion documents and flow charts, and maintains a database of ethical cases that have been brought for discussion.

“Many issues that editors are faced with have to be referred to the institutions for investigation,” says Curno, who serves on COPE’s council. To help them, COPE has developed guidelines on cooperation between research institutions and journals on research integrity casesexternal link.

Exchanging information about misconduct isn’t always easy in Switzerland, however, partly due to the country’s system of federalism, says the SNF’s Seelmann. “From the perspective of SNF it’s unproblematic. We give and ask for information. But the individual universities, which for the most part are cantonal, often aren’t authorised to give information to us.”

Institutions in Switzerland have perhaps less experience in dealing with publication fraud - for better or for worse.

Scientific misconduct unfortunately happens everywhere, says Curno. “The important point is that institutions have procedures in place to swiftly and fairly investigate concerns and to actually communicate that in a clear manner.”

Disclaimer: Jeannie Wurz was editor of the COPE newsletter “Ethical Editing” from 2009 to 2012

Some Swiss procedures and guidelines

Likewise, the Swiss Federal Institute of Technology Lausanne (EPFL) has a Directive Concerning Research Integrity and Good Scientific Practiceexternal link, which defines the basic principles for the planning, execution, presentation and evaluation of research, and applies to all EPFL members involved in scientific research, from teaching and scientific staff to PhD candidates, students,  research associates and guests.

The Swiss National Science Foundation, a funding body that invested CHF819 million ($859 million) in Swiss scientific research in 2013, has regulations for the treatment of scientific misconduct by applicants and granteesexternal link.

Many organisations, like the EPFL and the SNF, have invested in computer software that evaluates manuscripts and grants for plagiarism, comparing submissions with a database of already published texts. “With material now being online, and available software programmes that we have, plagiarism is actually quite easy to detect, says Mirjam Curno, editorial manager at Lausanne-based journal publisher Frontiers. “Publications are available electronically. They’re accessed more widely by more people. And you can even start to run programmes that look for anomalies and statistically improbable data.” 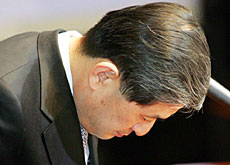 "It's difficult to prevent scientific fraud"

The South Korean cloning scandal and fraud charges against a Norwegian cancer expert are the tip of the iceberg, a Swiss scientific researcher ...

As healthcare costs continue to spiral upwards, regulators, doctors and patients more than ever rely on the integrity of clinical trials to assess ...

Three Geneva researchers find that shame, far from being a negative emotion, is something positive that can have great moral value for individuals ...