Already eliminated from Euro 2008, Switzerland will nevertheless be looking to leave the tournament with their pride when they meet Portugal on Sunday.

Their final group match, to be played at the St Jacob's Park stadium in Basel, will also be coach Köbi Kuhn's 73rd and final match in charge of the national squad.

The 64-year-old Kuhn, who is stepping down after the tournament to be replaced by Bayern Munich's Ottmar Hitzfeld, is determined to go out on a high.

"The public deserves another quality match from us," he said.

On Friday Swiss defender Patrick Müller also urged Switzerland to forget about their elimination and fight for their honour on Sunday. The 31-year-old also described how the co-host's decisive loss to Turkey marked the "worst day of his life".

"We waited so long for this and the disappointment is massive," Müller said. "You can't talk about bad luck. You have to be better than the other team, and score more goals."

He said Switzerland would try hard to win against Portugal on Sunday to give the home fans something to cheer about after two losses.

Choosing who will walk out onto the pitch on Sunday isn't difficult, according to former international player and coach Umberto Barberis. "As a coach, you have to play the best players – and those who were in the teams that lost to the Czech Republic and Turkey were perhaps not the best."

Barberis, a consultant for swissinfo during Euro 2008, said changes on Sunday would be inevitable.

"It's not about rewarding those who didn't play in earlier matches but about leaving Euro 2008 with one's head held high. For me victory isn't necessary because [Portugal] are a top side – a draw would be an excellent result."

The match means little for Portugal, who qualified with Switzerland's loss, but it could give some Portuguese substitutes a chance to impress before the quarterfinals.

"That could make it more difficult," Müller said. "The players on the bench want to show what they can do so they can get on the pitch."

But Barberis said that although Portugal are certain to finish top in the group, they are not going to take it easy in their final group match. "Losing is never motivating," he said.

On Friday the Portuguese team returned its focus to Euro 2008 after a much-welcomed break.

The squad took the day off on Thursday, when much of the talk was about coach Luiz Felipe Scolari's new job with Chelsea after Euro 2008.

Scolari said after beating the Czechs that he wasn't sure whether he would rest some of his players in Basel against Switzerland.

"We will think about it," Scolari said. "We still have some things to adjust, but the victory gives us the opportunity to organise ourselves."

Most of Portugal's players are coming off a long European season with their clubs and could use some rest. Manchester United star winger Cristiano Ronaldo and Chelsea's defenders Paulo Ferreira, Jose Bosingwa and Ricardo Carvalho joined the squad late because their clubs reached the Champions League final.

Portugal are trying to repeat their successful campaign of four years ago, when they reached the final at home before losing to Greece. Two years later, the team got as far as the semifinals in the 2006 World Cup, losing to France.

Plans for Switzerland and Portugal to train at St Jacob's Park had to be cancelled on Friday because the turf was still wet following the torrential rain during Wednesday's match between Turkey and the Swiss that had the ball sticking in puddles and players creating spray with every step.

Uefa said the teams had to switch their training to different venues to help the grass recover in time for Sunday.

"It's just a preventive measure," Uefa spokesman William Gaillard said. "The drainage worked quite well, but with constant rain it is important to keep the pitch in good condition."

Gaillard said there was no danger of the match having to be moved or rescheduled.

"And we have to deny rumours that Uefa will merge with the European Water Polo Association," he added.

Switzerland is co-hosting the Euro 2008 football tournament with Austria from June 7-29.

The two countries were chosen to host the third-biggest sporting event in the world – and the biggest in Swiss history – on December 12, 2002.

The 31 games will be played in four cities in Switzerland (Basel, Bern, Geneva and Zurich) and four cities in Austria (Innsbruck, Klagenfurt, Salzburg and Vienna). The final will be held in Vienna on June 29. Switzerland will play its three group matches in Basel.

The finals will be broadcast in 170 countries and are expected to be watched by about eight billion cumulative TV viewers. 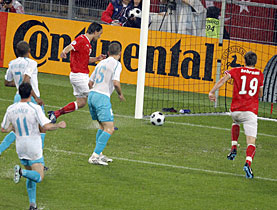 Switzerland have been beaten 2-1 by Turkey in a crucial group match at the St Jacob's Park stadium in Basel. The co-hosts are therefore out of ... 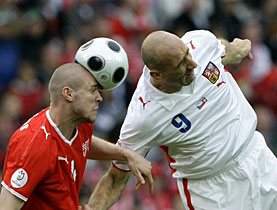 Swiss lose 1-0 to the Czech Republic

Switzerland have been beaten 1-0 by the Czech Republic in the opening game of Euro 2008 at the St Jacob's Park Stadium in Basel. A goal by Vaclav ... 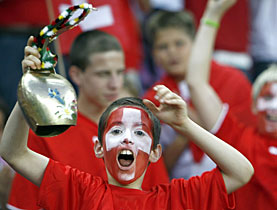 At 6pm on Saturday the five-and-a-half-year countdown for Euro 2008 ends and the action – and reaction – begins when Switzerland face the Czech ...