Europe's first ever mission to Mars blasted off this week, with Switzerland playing a key role in the European Space Agency's project.

To mark the occasion, swissinfo interviewed Swiss space veteran and ESA member, Claude Nicollier, about life as an astronaut, his space walk and his fascination for space.

Nicollier - Switzerland's only astronaut - has taken part in four space flights and has logged more than 1,000 hours in space, including an eight-hour long space walk during his last mission.

His first shuttle mission was aboard Atlantis in 1992 and his fourth and final flight was on Discovery in December 1999.

He will retire next year, but he hopes to remain a member of the ESA.

swissinfo: When did you first become interested in space?

Claude Nicollier: My interest started when I was very young. I was fascinated by planes and science and by especially astronomy. So I decided to study physics in Lausanne and afterwards astrophysics in Geneva.

My goal was to become an astronomer, but I had to start with physics. Fortunately, under the Swiss militia system, you could become a fighter pilot in parallel with a job - and that's what I did.

So I had achieved two of my dreams: to become a pilot and an astronomer in particular. But at the time of course the Americans and the Soviets had started the exploration of space, and I had the feeling that, as fascinating as it was, it wasn't for me because I was neither American nor Soviet.

swissinfo: So as a young man it never entered your head that you might one day become an astronaut?

C.N.: No. It was only in the mid-70s that a real opportunity arose. That's when the ESA was regrouping, and the 11 member states in Europe, including Switzerland, decided to cooperate with Nasa on the shuttle

ESA decided to contribute to the space lab programme, which is a lab onboard the shuttle used for very scientific missions.

And at the same time it announced it would send Europeans on some of the Shuttle missions. When I heard about that I of course applied. At the end of the one-year selection process, the ESA selected three out of 2,000 applicants.

swissinfo: What sort of training did you actually have to go through before you could take part in a shuttle mission?

C.N.: There is physical training of course, but it is more mental training about the technology, the space ship, the experiments, the teamwork and the interaction with your fellow crew members and ground control.

swissinfo: What is it like to take off in the shuttle?

C.N.: I was fascinated by the work we were doing there, especially the two missions to the Hubble space telescope. The views of the earth, the starry nights, the absence of gravity, floating in the cabin - these are all impressions that are incredible, fantastic, unbelievable and hard to describe.

As an astronaut and at the same time an astrophysicist it was a huge privilege to have the chance to work in space at 600km altitude, travelling at 28,000km an hour, 16 times around the earth in a terrestrial day on the most incredible scientific instrument ever conceived to explore the universe.

swissinfo: What about stepping outside the shuttle and walking in space?

C.N.: That's another dimension of space flight altogether because suddenly you are detaching yourself from the spaceship - not completely because you have a thin physical link to the shuttle for safety reasons.

You have your own space ship on your back with all the resources you need -oxygen supply, the cartridge that eliminates the carbon dioxide in the flow of pure oxygen that your breathe.

And if you have a problem you have to return to the airlock immediately.

swissinfo: What's going through your head just as you step out?

C.N.: Oh, it's excitement mixed with a little bit of concern. It's like the fear an actor has before going on stage.

But that passed once I opened the outer hatch of the airlock and started to work. I was so well trained, having had hundreds of hours in water doing the same thing and being prepared to cover any uncertainties of the space walk.

swissinfo: Do you also get training for the possibility that perhaps you won't return from a mission - especially in light of the Challenger and Columbia accidents?

C.N.: No, we don't. We know space exploration is an adventure. It's moving the boundaries of knowledge and where humans go in the solar system.

We accept the risk that's associated with it. Every accident is followed by improvements in the space ships so we reduce the likelihood that a similar accident will happen again.

swissinfo: What will retirement mean for you?

I have noticed a great interest from young people in space exploration and I would like to contribute to a greater understanding among them of space and astronomy.

So I'd like to do some teaching at the Federal Institute of Technology in Lausanne next year.

Some key dates in space exploration:
4 October 1957 - The Soviet Union launches Sputnik 1 Earth orbiter.
April 12, 1961, Soviet cosmonaut, Yuri Gagarin becomes the first human in space.
July 20, 1969, US astronaut, Neil Armstrong, becomes the first human to set foot on the moon.
April 12, 1981, launch of Columbia - the first manned space shuttle.
January 28, 1996, all seven members of the Challenger crew are killed in an explosion 73 seconds after liftoff.
February 20, 1986, the first element of the space station, Mir, is launched into orbit.
February 1, 2003, all seven members of the Columbia crew killed as the shuttle prepares to land after a 16-day mission.

Critics of the International Space Station (ISS) often describe it as being "Frankenstein's monster". They claim it is well over budget and ... 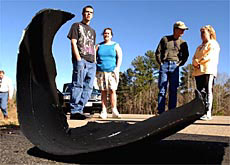 World leaders have expressed shock and sadness after the space shuttle Columbia broke up as it re-entered the Earth's atmosphere, killing all ... 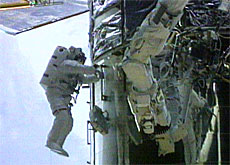 Exploration of the final frontier has been given a boost by two Swiss universities, who are setting up the country's first chair of space technology.