Switzerland is hoping to clear its tarnished environmental protection record by rolling out public awareness events to mark the 2010 Year of Biodiversity.

A damning 2007 report by the Organisation for Economic Co-operation and Development (OECD) found more animal and plants were threatened or had disappeared in Switzerland than in anywhere else in Europe.

To mark the United Nations designated biodiversity year, the Swiss environment ministry and various non-governmental organisations have teamed up to develop a series of events to run in 2010 to boost public understanding of what biodiversity means and how it can be enhanced in Switzerland. The programme will be announced on January 12.

In parallel, a national strategy is being developed for protecting biodiversity and is expected to go before parliament in 2011. Switzerland’s lack of a national action plan was a major criticism of the OECD report on Swiss environmental policies.

“It is true that the OECD designated biodiversity as a weak point in Swiss environmental policies,” Elisabeth Maret, spokeswoman for the Federal Environment Office, told swissinfo.ch.

“It is clear that there is a need to act. It is also clear that biodiversity in Switzerland is not guaranteed in the long-term. We have lost a lot of biodiversity and ecosystems, especially natural spaces, since the 19th century.”

More than 220 species of flora and fauna have become extinct or disappeared in Switzerland in the last 150 years. Almost half of local animal life is currently on the red list of endangered species and more than a third of ferns and flowering plants, as well as moss and lichens, are considered “at risk”.

But Maret noted that similar changes were happening elsewhere across the planet due to urbanisation and population growth, and the situation in Switzerland had stabilised under measures taken over the past 15 years.

The national strategy is being developed by the government in consultation with interested organisations. It should set out binding measures and have two key aims: to maintain biodiversity sustainably and for biodiversity to be sufficiently rich to adapt to changes.

“It is very important that Switzerland puts this strategy in place,” noted Roland Schuler of ProNatura.

“This is the basis for all the action the government will take, the terms and in which fields of biodiversity. It has been developed quite late compared with other countries in Europe. So we really hope it will be in place and that it outlines tough action.”

He noted that a general lack of awareness about biodiversity in the past had led to a lack of political will to develop a coordinated action plan and had therefore resulted in a lack of finance.

“This is a horrible mixture if you want to take action. The public, including politicians, are not really aware of what biodiversity does for people and how the loss in the long-term will damage our lives.”

A recent survey by the Federal Environment Office on biodiversity found that a majority of people knew the term but did not know its full meaning, believing it to simply describe different species.

The year of events across the country to promote the theme will include special activities in zoos, tours and field trips. A sustainability award will be given and the annual Nature congress in Basel will be dedicated to the theme of biodiversity.

“The goal of this year is for everyone to talk about biodiversity, in the streets and not just the specialists. We have the impression that all is well with biodiversity in Switzerland. That is not the case at all,” explained Daniela Pauli, executive secretary of the Swiss Biodiversity Forum, one of the partner organisations.

“We hope that after this year that people know that biodiversity is threatened in Switzerland and that it is important in our lives. It is not just about rare plants or animals, biodiversity affects us in all aspects of our lives.”

The Federal Environment Office describes biodiversity as the life that surrounds humans in all its forms, i.e. ecosystems, species and genetic diversity within a species. A third of humans food is drawn from plants pollinated by wild animals. Natural ecosystems contribute to the good quality of drinking water.

The effects of climate change on biodiversity are already visible – certain alpine species are moving up to higher altitudes by an average distance of 13 metres.

A national biodiversity monitoring programme, which was launched in 2001, shows that Mediterranean species such as different types of butterflies, have been arriving in alpine areas.

A plan for the nation

A national strategy for protecting biodiversity is being developed by the government with a consultative body of NGOs and interested organisations.

The government set out two main aims for the strategy: to maintain sustainable biodiversity and for biodiversity to be sufficiently rich to adapt to changes.

It also set out four pillars of action: to provide enough protected space, to use resources in the country sustainably, to better understand the economic value of the biodiversity and for Switzerland to better assume its international responsibilities for biodiversity.

The strategy is due before parliament in 2011.

The United Nations has declared 2010 as the International Year of Biodiversity.

A calendar of events for Switzerland will be announced on January 12 by Environment Minister Moritz Leuenberger in a ceremony at the railway station in the Swiss capital, Bern. 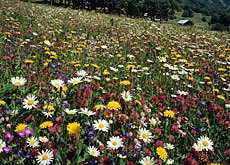 Farmers could win from greater biodiversity

The positive effect of biodiversity on the ecosystem is far more profound than previously thought, according to a study carried out in part at ... 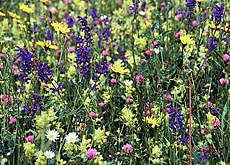 Biodiversity in Switzerland will be affected by changing temperatures but exact consequences are hard to predict, according to Swiss experts. ...

Switzerland is almost top of the world charts when it comes to flora and fauna threatened with extinction, according to criticism voiced on ...