The Swiss embassy in Saudi Arabia said that negotiations were underway to free the man and the woman, who were kidnapped in the mountainous Maarib province.

"The Swiss consul in Yemen is being kept informed by the local authorities," said Dominik Alder, Switzerland's ambassador in Riyadh, who also oversees Swiss interests in the neighbouring republic.

Alder was not able to say who was responsible for the kidnapping, nor if a ransom demand had been made.

Lars Knuchel, a spokesman at the Swiss foreign ministry in Bern, told swissinfo that the case concerned "a man and a woman of Swiss nationality".

Nobody at the Yemeni embassy in Geneva was available to comment when contacted by swissinfo.

A Yemeni government official told the Reuters news agency that the tourists were taken in the oil-producing Maarib province east of the capital Sana'a. He declined to give more details.

Tribal sources in the area said the kidnappers' leader wanted to secure the release of his brother who was jailed in Sana'a last month on suspicion of stealing a car.

Tourists have often been seized by armed tribal groups in Yemen, a poor country at the tip of the Arabian peninsula where central government control is weak in many areas. They are usually released unharmed after negotiations.

The Swiss foreign ministry warns tourists of "important risks" when travelling to Yemen. The ministry website says that a number of foreign tourists and businessmen have been kidnapped in recent years, occasionally resulting in their deaths.

The ministry recommends travelling within the country only with local guides.

Foreign-owned installations have also suffered from bomb attacks in Aden and Sana'a.

Osama bin Laden's al Qaeda organisation has carried out attacks against American interests as well. In 2000, bin Laden claimed responsibility for a bombing against a US naval destroyer in the port of Aden that left 17 sailors dead.

Yemen has a total surface of 536,000 square kilometres, almost as big as France.
The Swiss foreign ministry recommends avoiding trips to Yemen because of ongoing unrest.
Foreign tourists have been regularly kidnapped for ransom or to obtain the release of prisoners.

North Yemen became independent of the Ottoman Empire in 1918.

The British, who had set up a protectorate area around the southern port of Aden in the 19th century, withdrew in 1967 from what became South Yemen.

After two decades of hostility between the states, they were formally unified as the Republic of Yemen in 1990. 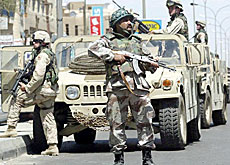 Two Swiss nationals held hostage in Iraq for 48 hours have been released, the foreign ministry said on Thursday. The Swiss foreign minister, ...