As freezing weather creates havoc across much of Europe, temperatures in Switzerland could drop to -30 degrees Celsius at night this weekend.

Sweeping south from Siberia, the cold air mass has caused at least 58 deaths this week in central Europe, including dozens who were homeless.

It is expected to peak in Switzerland on Friday or Saturday with temperatures of around -8 to -11 during the day, according to Thomas Bucheli from the public television weather programme, SF Meteo.

“It’s an unusual weather event. We have to go back to January 12, 1987, when we had the lowest temperature ever in Switzerland, -41.8 degrees in La Brévine, and the air mass was mostly the same as we have now,” Bucheli told swissinfo.ch.

However, the record is unlikely to be beaten this time around because the easterly wind arriving towards the end of the week will prevent temperatures from falling further.

“For people, the wind chill factor will play quite a role, but the measured temperature is unable to go very low when it is windy,” Bucheli said.

“Perhaps we will have to wait until Saturday or Sunday when the wind goes, then it could be that temperatures go down overnight to about -25 or -30, [not only in the mountains but] also in the lowlands.”

Bucheli said it was unlikely that more heavy snowfalls would occur in the coming days because the cold air would contain little moisture. He said snow or “freezing rain” could arrive with the passing of the Siberian mass.

“It’s a bit speculative – the end of these cold days might be a bit of a surprise,” he said.

Aware of the danger presented by the freezing temperatures, cantonal authorities are preparing to open additional emergency shelters for the homeless.

In Geneva, the 200 beds available in homeless shelters are full and authorities have announced they will open an extra 80 beds for the coming week. Authorities in Lausanne are planning similar moves.

“We’re going to do as much as we can,” Michel Cornut, head of Lausanne social services told the Swiss News Agency. “But unfortunately I’m not sure that we can accommodate everyone.”

Cornut said priority for places would be given to Swiss homeless people, women and children, the elderly or sick, before others, including the many Roma who would normally sleep in their cars and are expected to seek shelter.

Swiss Federal Railways has declared the coming weekend one of “high alert”, calling up an additional 360 personnel to be available to clear snow from station platforms and ice formations from tunnels.

Despite this, spokesman Daniele Pallecchi told swissinfo.ch major delays or disruptions to train schedules between major cities were not anticipated.

He said the most important aspect to ensuring the smooth running of trains were the track switches, most of which were automatically heated once temperatures dropped below zero.

“We run more than 9,000 trains a day, so we begin preparing for the winter in the summer for example by checking the heating of the carriages and the track switches,” Pallecchi said.

He said cold weather alone would not cause major delays, but heavy snowfalls, pieces of ice on the switches or electric lines “could become a problem for punctuality”.

While ten centimetres of snow caused flight delays at Geneva airport Tuesday, Marc Rauch, a spokesman for Zurich Airport, told swissinfo.ch that airport authorities did not anticipate major delays because of the cold weather.

He said the airport was well-prepared for de-icing the runway and planes and did not expect any major delays to traffic this week.

“We do not need special preparations because it’s not the first time that it’s cold – last year we had a week of -10 degrees – and secondly the cold itself doesn’t affect aviation. It’s cold and moisture together which needs de-icing before departure, but this is a regular procedure even when temperatures are above zero.”

Rauch said winds would have to gust to up to 100 km/h in order to disrupt air traffic, but he conceded that disruptions to traffic at other European airports could have an impact on flights in and out of Zurich.

“Check online before coming to the airport whether the flight will be going or not, just to be sure,” he advised.

Meanwhile, record snowfalls in alpine regions during the last week of January combined with expected sunny conditions have tourism operators looking forward to a bumper weekend.

“The most important thing for us is how sunny it is,” Urs Zenhäusern, director of Valais Tourism, told swissinfo.ch.

“For the moment, predictions for the weekend are that we’ll have sunny days in Valais. We have already had several days, particularly on weekends, that have been cloudy with snow and because of that we lost a certain clientele.”

And while the wind chill factor could make conditions feel even colder on the slopes, Zenhäusern said ski clothes “are warmer these days, so it’s less of a problem than before”.

“At the moment, we have excellent snow conditions – the best we’ve had in the past ten years,” he said, adding that road closures due to snow were unlikely. 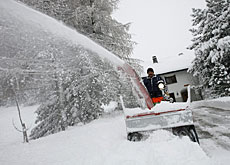 Snowiest start to winter in 55 years

Up to 120 centimetres of snow has fallen on the Swiss Alps since Friday, the largest amount at the start of winter for over five decades – and ...

Switzerland may have been spared the cold weather disruption at many European airports but its busiest hub - Zurich – says it is well prepared for ...

Providing warmth and company for the homeless

Many large Swiss cities provide overnight shelters for the homeless, which offer not only a warm bed, but also company – particularly precious at ...

Winter has Switzerland - and most of Europe - in its icy grip. Heavy snowfall brings joy to skiers and children, but chaos to traffic and ... 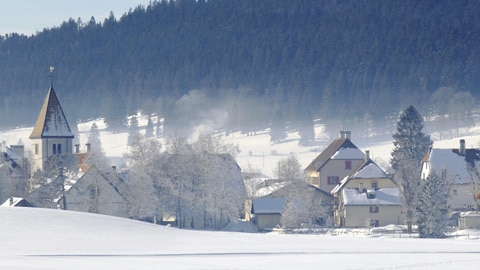