Switzerland has boosted its diplomatic presence in Nepal, upgrading on Monday its general consulate in the capital, Kathmandu, to an embassy.

The move comes as the Swiss Agency for Development and Cooperation (SDC), the country's foreign aid arm, is celebrating its 50th anniversary operating in the Himalayan country.

Speaking to swissinfo.ch ahead of the official opening ceremony of the embassy, Bern's new ambassador to Nepal, Thomas Gass, said Switzerland was looking to increase its political involvement in the country.

Gass, who is also the SDC's country director in Nepal, says Switzerland will continue as an advisor to Nepal's constitution-writing process.

swissinfo.ch: Switzerland and Nepal have always had a special relationship. Why is Nepal so significant for Switzerland?

Thomas Gass: Switzerland and Nepal have a lot in common. They are both landlocked, they both have a strong rural history and both had to bring together a culturally and linguistically diverse population. These are some of the reasons why Switzerland started its work in Nepal, first through non-governmental organisations and then officially through the SDC.

Over time, this relationship has deepened. The Swiss like hiking and come here on holidays. They very quickly realise the potential of the Nepali people once their own strengths and human capacities are given the right environment.

swissinfo.ch: Now, after 50 years of providing development aid to Nepal and building thousands of bridges, what is going to change with the arrival of an embassy?

T.G.: In the past decade, we have done much more than just building physical bridges in Nepal. We have provided support in the peace-building process and democratisation. We have also helped disadvantaged groups come to the fore, participate in the decision-making process and benefit from public services.

These activities can be facilitated through mediators and peace-building advisers, and we certainly want to keep up this work, which we have mainly done behind the scenes.

Through opening an embassy, we are hoping to increase our role in the political arena and seek dialogue with other participants in the peace process. We want to provide better consular services to Swiss nationals in Nepal, as well as tourists, and Nepalis travelling to Switzerland.

swissinfo.ch: Which role will you personally play in all this?

T.G.: I am actually wearing two hats here: firstly, I am the ambassador and secondly I am the SDC's country director, a position that will probably take up 60 per cent of my work. I will make sure we apply our 14 principles and engage in the field without doing harm and without taking sides.

During the conflict, these principles allowed us to continue our projects, which is pretty unusual as development aid is usually slowed down during times of conflict.

swissinfo.ch: What is your first impression of the country?

T.G.: It may sound like bragging but I am very proud to join the Swiss team here. Our people in the Kathmandu office and in the field are extremely professional. During my short field trip, I saw the planting of trees, how communities build roads and what strategic role footbridges play in this country.

We have built about 3,000 of them. It is also good to see local staff empowered. We do not have a very big Swiss contingent as we are trying to empower locals and that is working really well here.

swissinfo.ch: You have just spent five years in New York. Did you have a culture shock when you arrived in Nepal?

T.G.: I lived in Guyana and worked in Africa and the former Soviet Union. I have seen countries that are struggling with development and globalisation. I am not shocked at all. I am actually impressed to see how hard working the Nepali people are.

I am sure that if this country manages to get through this constitution-building process it has great potential, even though is not endowed with enormous natural resources. Nepal will never be a big player in globalisation, however, they are a nation of mountaineering people, who are tough and resourceful, and we want to be there to assist them.

swissinfo.ch: How much will Switzerland be involved in advising the constitution-writing parties?

T.G.: We have been helping behind the scenes in the past, and we will continue to give advice. We have been asked to provide input to some of the working groups involved in drafting the constitution and we have supported a dialogue about federalism. But this process belongs the Nepali people and they should have the lead and ownership of this process.

swissinfo.ch: Do you think a country like Nepal will ever be able to model its federalism on Switzerland?

T.G.: Federalism has been very useful for Switzerland as it brought about synergies in a diverse cultural and linguistic environment. However, in Nepal it is not so easy as there are a number of groups that are currently discovering their identity, and the differences between the cultures and religions are much bigger here. Moving away from a centralised government, which Nepal has had for many years, will be difficult but certainly possible.

Thomas Gass was born in Neuchâtel in 1963. He holds a PhD in biology.

He began his career with the SDC in 1988 and has held positions in the Swiss civil service and with the United Nations.

Gass is married, two of his children study in Switzerland and the third lives him and his wife in Kathmandu.

Nepal is one of the Swiss Agency for Development and Cooperation's (SDC) priority countries. The SDC in Nepal works mainly in rural areas, which were partially controlled by the Maoists during the conflict.

Nepal was ruled by the Shah Dynasty of kings for 239 years, however, mass protests by all major political parties in 2006 led to the abdication of the king.

After a nationwide election in 2008, Nepal was declared a federal democratic republic and the monarchy abolished. Former Maoist leader Pushpa Kamal Dahal was elected prime minister but he stepped down in May 2009 following a dispute over the Nepali army.

Apart from being active in rural infrastructure development, building suspension bridges and roads, the SDC has been heavily involved in the peace process in Nepal.

It is also involved in activities linked to the conflict such as human rights initiatives, both nationally and at local level.

Nepal has a population of 28.3 million.

Nepal is home to eight of the world's 14 highest mountains.

Eighty per cent of Nepalis are Hindu, with the rest being Buddhist, Muslim or Christian.

International aid makes out about 30 per cent of Nepal's annual budget. 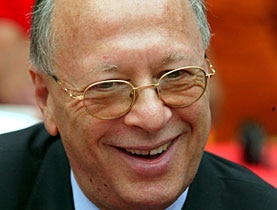 Switzerland has no clear strategy for facing current global crises and challenges, according to former Swiss ambassador François Nordmann. He ... 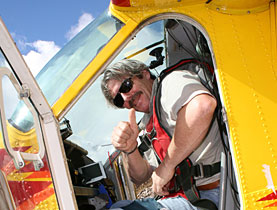 Two Swiss pilots have flown their Pilatus Porter plane from Biel all the way to the Himalayas to become part of the first ever Everest skydiving ... 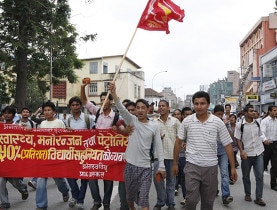 Maoists settle into power in Nepal

A newly-Maoist Nepal is still finding its bearings, says Swiss development consultant Thania Paffenholz, who has just returned from the fledgling ...

Crossing the Himalayas with refugees. It has been 50 years since the Dalai Lama fled the Chinese occupation to find refuge in India, drawing over ...