It says that the high proportion of part-time female teachers is damaging the image of the profession.

Anton Strittmatter, from the Swiss Teachers Association, says the organisation is very concerned about the lack of men entering the profession, because it means an enormous pool of talent is not being tapped.

“We believe that there are very many men who could be good at teaching but for whatever reason don’t want to become teachers and we think this is a real loss of potential talent,” Strittmatter told swissinfo.

“This doesn’t mean that women don’t do a good job. But it’s not good for any profession when a potential pool of skills is not used,” he added.

The association also feels that the high percentage of women in the profession is having a negative effect on salaries and reputation of teaching.

Strittmatter said that history has shown that professions that become traditionally associated with women tend to decline socially.

“We’re afraid that if the number of women entering teaching continues to grow there will be negative consequences,” said Strittmatter.

“These could include wage dumping, a worsening of work conditions, [and] an increase in work on demand, because we are already seeing a growing tendency for many female teachers to work part-time, and all this could mean that the profession could lose its former prestige,” he explained.

Strittmatter said this “feminisation” of teaching is one reason men aren't becoming teachers. Another reason is that there is a lot of competition from other professions.

The association also believes that having too few men in schools means that many children are deprived of male authority figures in early life.

This concern is echoed by psychologist, Allan Guggenbühl, who says ideally there should be a 50/50 split between male and female teachers.

“If there are no male teachers around it can be problematic for certain children,” Guggenbühl told swissinfo.

The Swiss Teachers Association says it has commissioned a study to look into the problem of falling numbers of male teachers and aims to launch a campaign next year to encourage more men to go into teaching.

But not all members of the profession agree the problem is an urgent one.

The Swiss Conference of Cantonal Ministers of Education, which represents the country's 26 cantons in education matters, recently presented a new mission statement for teaching with no mention of a need for more male teachers.

And many teachers and educationalists say what is most important is that the teaching is of good quality. 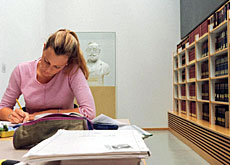 Switzerland still lags behind other countries when it comes to offering equal education to men and women. The latest report by the Organisation ...

Below is a summary of how the Swiss education system is organised. Compulsory schooling lasts nine years. The school year may not be of fewer ... 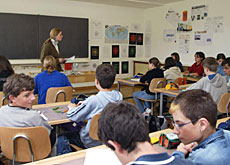 Teachers across German-speaking Switzerland are being urged to use High German rather than dialect in the classroom. The move, which coincides ...