High on a hillside in the Alps, Hans-Peter Schmidt has begun an experimental vineyard where ancient clues for solving climate change may lie buried in the soil.

"Look at this," he says, stooping low to claw the earth. "See how black it is? This soil is alive. It could have a huge impact."

That's because Schmidt is no ordinary winemaker. Here in canton Valais, where about 140 producers make some of Switzerland's most popular wines, Schmidt runs a vineyard where the soil captures tons of carbon dioxide and methane gases each year while nurturing rich pinots noirs.

He is what agronomists might call a climate farmer, seeking to restore the soil's natural biodiversity while simultaneously preventing greenhouse gases from entering the atmosphere.

What's more, the techniques he's using could soon generate more than SFr100,000 worth ($89,730) of electricity each year almost entirely from renewable sources – more than enough to power his operation.

"His ideas are very, very interesting," says Franco Weibel, a lead agronomist at the Research Institute for Organic Agriculture, Europe's largest centre for organic farming, based near Basel.

"One of the big challenges for future farmers is how to get carbon in soils sustainably fixed and at durable levels. We need more research, but there is big potential."

Schmidt is now a research consultant for Delinat in St Gallen, one of Europe's largest organic wine distributors that has interests in about 40 vineyards scattered all over the continent.

Most of the work he does with climate farming takes place in a small vineyard called Mythopia that he started four years ago on the terraced slopes above Sion, in the southern canton of Valais.

When he bought the vineyard the soil was dead, Schmidt says, the product of decades of chemical fertilisers and intense farming.

"The problem with vineyards is that they create a monoculture that leads to the destruction of plants, insects, birds, animals and thousands of organisms living in the soil," he says.

"You kill all of that to make wine when that isn't necessary. Without changing the quality of the wine you can keep it all alive."

"My neighbours thought I was crazy," he says.

In return, though, he made significant gains.

"They have to spray against bees because bees feed on their grapes," he says. "Here, I have bees but they don't eat the grapes, they go to the flowers because I have flowers."

Today his production is small, just 10,000 bottles a year, but each fetches up to SFr33, twice what his neighbours can charge.

Climate Farming Climate farming uses agricultural means to keep carbon dioxide and other greenhouse gasses from escaping into the atmosphere.

But the most significant step Schmidt has made could rest in the soil. His hands cup chunky, black dirt that contains small bits of charcoal, such as you might find in a barbecue.

"In fact you could use it for a barbecue," he says. "But this is biochar. You can make it from anything organic, clippings, grass."

Or even the skins from pressed grapes.

Schmidt started making biochar about two years ago using a test machine that heats organic material up to about 550 degrees without oxygen using a method called pyrolysis. The end product is biochar, as well as gas and heat that can be used to generate power.

Farmers in the United States have been dabbling with the pyrolysis, but Schmidt and Delinat are the first to do it in Switzerland. The implications are far reaching – and ancient.

In the 16th century a Spanish explorer found an Amazonian civilisation that enjoyed land far more fertile than it should have been. The secret was only discovered centuries later when a Cornell University professor found a track of rich black soil several metres deep right next to poor, thin soil. It was biochar, which could prove to be something of a wonder substance for countries with poor soil.

"Think of it as a dynamic sponge," says Samuel Abiven, a researcher at Zurich University studying biochar. "It can store minerals, hold water, retain pollutants and house micro-organisms."

That's not all. When organic material rots in the open air, it releases carbon dioxide and methane, two contributors to global warming. Composting helps reduce the amount of gas released but pyrolysis is even better since it stops organic material from rotting in the first place, thereby keeping gasses from being released into the atmosphere.

Exactly how much gas is captured is still being researched.

"A lot of people are very optimistic about biochar," Abiven says. "I'm not because we just don't know enough yet but we do have hope."

Schmidt's experiment has attracted attention from all over the world.

Schmidt says the test machine worked so well that Delinat now plans to purchase a larger machine for about €335,000 that will produce 1,000 tons of biochar. In addition it could also generate as much as SFr120,000 worth of electricity a year.

"It's a way to produce energy that isn't just climate neutral, but climate positive," Schmidt says. Carbon would no longer be released by power generation, but placed in the ground.

While the machine requires energy to run – which can skew the carbon equation – Schmidt is quick to say that it requires relatively little power to heat it up. Once that temperature is reached, a chain reaction unfolds and, as in composting, the organic material begins to generate its own heat.

The new machine should be operational in June and could supply vineyards and farms all over Europe with biochar.

In the meantime, Schmidt has wine to check on, so he wanders down to his cellar where he extracts a sample of his latest pinot noir from an oak barrel. It is rich and zesty, like the ground from which it was grown.

"We're not doing this just because of our heart for nature," he says. "We're doing it because it also makes good wine."

Biochar's potential profitability could be greatly bolstered by changes in the Kyoto Protocol.

Currently the agreement does not allow companies to offset their carbon output by supporting businesses that sequester carbon in the ground.

A revised protocol could bring vineyards that produce biochar SFr1,120 per hectare.

Vineyards could reap upwards of SFr1 million in extra income if 15-20 per cent of the vineyards in Valais produced biochar.

This would save as much as 14,000 tons of carbon dioxide from escaping into the atmosphere each year.

Fibl is the largest organic farming research centre in Europe.

It currently conducts numerous projects in eastern Europe, India, Latin America and Africa among other locations. 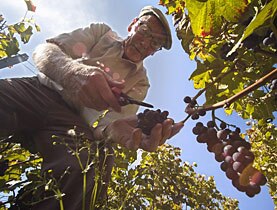 This year's stable weather conditions should lead to an excellent, healthy grape crop, wine producers in western Switzerland are predicting. ... 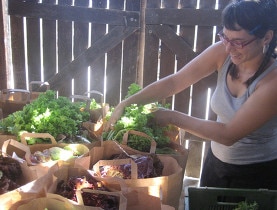 An increasing number of Swiss-French homes are having fresh organic fruit and vegetables grown by local contract farming cooperatives delivered to ... 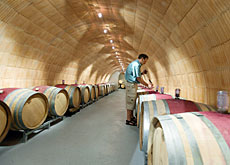 Several Swiss winegrowing regions have banned the use of oak chips to flavour premium wines, overruling a new law enabling them to do so. They ...

For more than 20 years Stefano Haldemann has been producing wine with utmost attention to the environment. Currently he's testing an unknown kind ...