Trade unions have called for measures to halt a continuing loss of purchasing power for low and average wage earners.

The president of the Trade Union Federation, Paul Rechsteiner, announced the launch of an initiative for the introduction of minimum wages later this month to protect employees against attempts to undermine salary levels.


Switzerland has no legal minimum salary, but such standards exist in most trades and professions.

“The average wage earner has less money to live on than ten years ago as a result of the continuous increase in health insurance premiums and higher rents,” Rechsteiner told a news conference on Wednesday.

He added that the income gap between richer and less affluent people had widened and the number of millionaires in Switzerland had increased more than five-fold since the mid 1990s.

The federation, which has about 380,000 members from 15 unions, also urged the Swiss National Bank to act to support the weak euro against the Swiss franc.

The trade unions accused the commercial banks of “playing dirty games” by encouraging an investment policy of strengthening the franc.

The Swiss Trade Union Federation has set its goals for the next ten years, calling for larger pension payouts for low to average wage earners. At ...

Recent cases of Swiss firms paying cross-border workers in euros or slashing salaries to cope with a strong Swiss franc are not isolated, warn unions.

Voters have overwhelmingly rejected a reform of the occupational pension scheme in an upset for the government and a majority in parliament. In ... 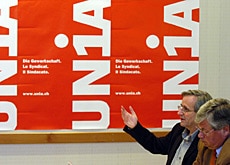 Switzerland's largest trade union, Unia, has called for a minimum wage of SFr3,500 ($2,886.5) a month, warning that workers earning anything less ...