As a rule, children in Switzerland have it good. And in Wauwil life is especially congenial. Unicef recently named it a child friendly town – a Swiss first.

Located about 30 kilometres northwest of Lucerne, Wauwil has a population of around 1,700. From here the Alps glimmer on the not-too-distant horizon.

Meanwhile, motorists seem to slow down as soon as you even consider crossing the street – a nice surprise in contrast to city life.

An enormous guest house dominates the centre of town. A little chapel stands at one end, a stately stone church at the other end. In between, there’s a bakery, bank, florist, gift shop, grocery store, hair salon, petrol station and post office. A tidy train station whisks townspeople to Lucerne and Olten.

And like any town catering to children, there’s also a school. Although it’s a Saturday, there are youngsters hanging out in the schoolyard. Not a bad place to be, considering the attractive playground and unseasonably warm weather.

“We’ve got everything we need here,” says 11-year-old Ivana, her blue eyes friendly.

“Well, it would be nice to have a shopping centre,” notes Katarina, 13. She’s dressed in several shades of pink.

“Oh, come on!” says Ivana, laughing. As Katarina’s brother Kristijan points out, they can always go to nearby Sursee if they need shoes or something. He’s ten.

Asked about the United Nations chuildren's fund certification, Ivana is quick to mention the playground’s new swing set – a gift for the children in honour of the town’s new distinction. She and her friends demonstrate how it works, taking turns pushing each other.

In 2007, the town of Wauwil decided to have Unicef certify its child friendly nature. After a detailed analysis and a series of workshops, Wauwil was able to identify the needs of the children.

Together with its young people, the town drew up a plan of action, including a list of priorities to tackle. By September 2009, Wauwil was ready for Unicef’s on-site evaluation. It passed the test, and the children’s agency officially declared Wauwil a child friendly town on November 20.

“It’s a wonderful feeling! We’re really pleased, and especially proud that Wauwil is the first Swiss town to get the label,” says municipal councilor Vreni Gassmann. “It recognises our long-term networking with the children,” notes Gassmann, who works in the town’s education department.

According to Gassmann, Wauwil is child friendly for several reasons. For example, children have a say when it comes to school-related matters. Children of all ages serve on the student council; even those in kindergarten get a voice.

“The student council discusses the latest affairs and acts as a link to the rest of the student body,” says Gassmann. It also has control over funds that the children can spend on games and toys. If they’re careless with school property, then the money goes toward repairing or replacing it. But if they’re careful, they can put the money toward new items.

As a local mother, Tharanie Varatharajah is impressed with the sense of responsibility instilled in the students.

“Children get to say what they’d like to do during recess. This teaches them to be more independent,” says Varatharajah. Her daughter, Vanesha, is seven years old and attends the second grade. The class regularly teams up with the kindergarten class to do something together, with the older ones leading the little ones. Together, they’re responsible for choosing the activity and cleaning up afterward.

In her free time, Vanesha’s favourite activity is playing with her friends. Wauwil scores well on this point, too.

“It has a lot of places where children can play – also out in nature. For example, the Wauwilermoos sport and recreation park,” says Mrs. Varatharajah. And as both she and Gassmann point out, children in Wauwil can choose from a variety of sport, music and leisure clubs.

To maintain its status as a child friendly town, Wauwil will have to stay on the proverbial ball. The “child friendly” title is valid for four years; after that, Unicef will be checking in to make sure that the community is still living up to its title.

“We’re looking forward to pursuing new goals with the children,” says Gassmann, In addition to the school-based student council, Wauwil plans to establish a new youth council that will be in direct contact with the local government. As Gassmann puts it, “Children are our future.”

Although his children are too young to participate in youth councils, resident Thomas Boog is enthusiastic about Wauwil’s status as a child friendly town.

“It’s super that we got it – not just for the town but for the canton and country, too,” says Boog, whose three children are all under six. “So far there are new toys for the kids as well as new signposts up around town. It will be interesting to see what happens next.”

Unicef is celebrating the 20th anniversary of the “Convention on the Rights of the Child,” which was established on November 20, 1989. It’s an international agreement on the basic human rights of all children.

As defined by Unicef, “a ‘Child Friendly City’ is a local system of good governance committed to fulfilling children's rights.” 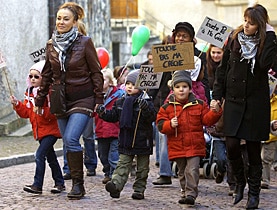 Although children who have attended some form of day care have a significant edge when they begin school, the head start does not last, new ... 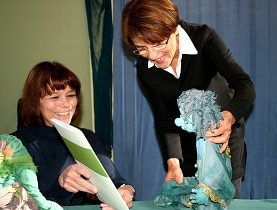 When puppets speak louder than words

While an adult with a problem can complain and explain, it sometimes takes the magic of puppetry to unlock the secrets of troubled children. From ... 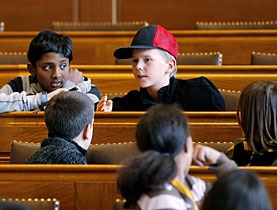 Why children should be seen and heard

Children's views need to be taken seriously and their voices heard, Unicef Switzerland has said. A report issued by the organisation on the 20th ...

My first day at school

Elias steps into the classroom

Basel's education bosses want to take parents to task for letting their children sleep on the job. If children regularly arrive late at lessons, ...