The World Health Organization (WHO) has declared a full-blown swine flu pandemic after an emergency meeting in Geneva on Thursday.

Switzerland, which has 20 confirmed cases, responded by saying it would not be introducing new measures to limit the spread of the disease as a result of the pandemic upgrade, but would follow the situation closely.

WHO Director-General Margaret Chan told a news conference on Thursday that the scientific conditions for an influenza pandemic had been met and the agency's pandemic alert level had been raised from phase five to the maximum of six, meaning that a global outbreak of swine flu had begun.

"The virus is now unstoppable. The world is now at the start of the 2009 influenza pandemic," she said.

"Globally we have good reason to believe that this pandemic, at least in its early days, will be of moderate severity."

The overwhelming majority of sufferers were experiencing mild symptoms and the number of deaths was small, but countries needed to be vigilant, she said.

It is the first influenza pandemic to be declared in 41 years.

The A/H1NI strain, which emerged in April in Mexico and the United States, has spread widely in places including Australia, Britain, Chile and Japan.

There have been more than 28,000 cases reported in 74 countries to date, including 141 deaths, according to the latest tally of the United Nations agency.

Switzerland says it is prepared for the pandemic, which will hit the country "sooner or later". "We have already adapted our measures to take into account the global situation," Patrick Mathys of the Federal Health Office told swissinfo.ch.

The measures include keeping the public up to date with the latest developments, advising people how to respond if they have symptoms or come into contact with those that do, as well as keeping sufficient supplies of anti-viral drugs and antibiotics in stock.

The authorities say they have enough supplies to treat all possible cases arising in Switzerland during a pandemic and last week announced they would buy an additional 40,000 Tamiflu doses to boost stocks.

The number of Swiss cases is expected to rise due to the global spread of the disease, but the Health Office says there is still no serious threat to the population.

Switzerland has learned a lot from the Sars (Severe Acute Respiratory Syndrome) crisis of 2003.

"Sars taught us how quickly a new virus can spread. We adapted our crisis planning accordingly and can now benefit from it," Mathys added.

The WHO said it was now recommending that flu vaccine makers start making a vaccine and the first doses were expected to be ready in September. Chan noted that different regulatory authorities needed to work together to speed up registration of a safe vaccine.

Drug makers including Switzerland's Novartis said on Wednesday they were on track to have a vaccine against the new strain ready for the northern hemisphere's autumn.

They have received seed virus samples in the past two weeks allowing them to begin the production process.

What is still unclear, however, is how much vaccine the pharmaceutical companies will be able to manufacture, since this depends on how easily the new virus strain grows within a commercial production environment.

Recent investment in flu vaccine capacity means firms are in far better shape to meet the challenge of a pandemic than in the past.

They are also well advanced in manufacturing supplies of the normal seasonal flu shot, allowing them to switch some capacity to making a pandemic A/H1N1 vaccine over the coming months.

Chan told reporters a choice would need to be made which groups should benefit from the first doses of a vaccine, as numbers would be limited at the start.

She said the virus was new, very contagious and easily spread. It could, like other flu viruses, be "full of surprises" and was expected to "circulate the entire world within one to two years".

The maximum alert level did not mean that the virus was going to become more virulent or that more people would become seriously ill or die, Chan noted. The severity of the virus could vary from country to country.

Each government needed to adapt its response to the evolution of the disease in its own country. "There must be no restrictions on the movement of people, goods and services," Chan added.

"It is important that affected countries maintain their levels of vigilance" and for those not yet affected to be prepared, she said.

Swine flu is thought to spread as easily as regular winter flu, which infects millions each year. Early estimates are that 25-30 per cent of family members are getting sick once a relative brings it home.

But it is not clear how dangerous it is. Genetically, it doesn't share the same traits that made the infamous 1918 pandemic so deadly. For now the virus is "pretty stable", but Margaret Chan warned that it could still mutate into a more deadly form, taking on characteristics of the H5N1 bird flu virus.

People aged 30-50, pregnant women or people suffering from chronic conditions such as asthma, diabetes or obesity are deemed at highest risk.

WHO has said two anti-viral drugs, Tamiflu and Relenza, have been effective against the new swine flu if administered at an early stage.

A unanimous experts' decision to move to pandemic alert level six was based on an overall assessment in the eight most heavily hit countries - Australia, Britain, Canada, Chile, Japan, Mexico, Spain and the United States - where the virus is spreading in a sustained way in communities.

Acting on the recommendation of flu experts, the WHO reiterated its advice to its 193 member countries not to close borders or impose travel restrictions to halt the movement of people, goods and services.

The WHO confirmed it would start distributing a further donation of 5.65 million courses of Tamiflu from Swiss drugmaker Roche, part of which includes a formula for children. 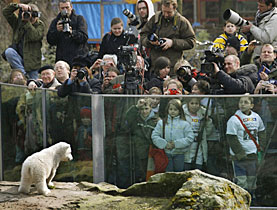 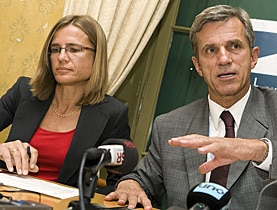 Switzerland is very well prepared to deal with a likely second wave of swine flu this autumn, say senior Swiss health officials. They made the ... 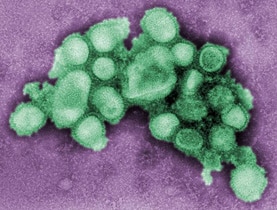 Demands on the virology laboratory at Geneva University Hospital have been high since the outbreak of swine flu, which has also reached Switzerland.

Scary but colourful characters. Viruses come in all shapes and sizes. Here's a selection of some of the more dangerous ones lurking out there.