Swiss lakeside areas are to be subject to a ban on keeping poultry outdoors during the winter over fears that bird flu could be transmitted from migrating wild birds.

The Federal Veterinary Office said on Friday that these zones were considered to be the most at risk from the deadly H5N1 strain of the virus, of which there have been recent cases in neighbouring countries.

From October 15 a one-kilometre zone around Switzerland's largest lakes, such as Lake Constance and Lake Geneva, will be subject to the restrictions.

This means that poultry owners, both amateur and professional, will have to keep their birds inside when feeding them. They will also have to keep them away from wild birds at all times and farms and smallholdings will be under veterinary supervision.

The Veterinary Office said that the measures were necessary to coincide with the start of winter and the migration season.

"We know that a lot of wild birds will spend the winter in Switzerland - we have half a million wild birds in winter and only 50,000 in summer," Veterinary Office spokeswoman Cathy Maret told swissinfo.

These latest measures, ordered by the government, are estimated to affect at least 800 people, said Maret. The partial ban is due to end on April 30, 2008.

In other years there has been a full ban on keeping domestic fowl outdoors. Maret said that this year officials had decided that such a move would not be necessary. Transmission of the virus from wild birds to poultry was still rare, she said.

In 2005 and 2006 there were 32 cases of the bird flu virus in wild birds in Switzerland, but the country has not recorded any more cases since then.

However, Maret warned that future infections could not be ruled out.

"The risk is there, bird flu is still around, we saw that in Germany, where they also had cases in poultry, so that's why we are taking protection measures," she said.

Earlier this month the German authorities culled tens of thousands of fowl at several farms in Bavaria after discovering H5N1, the most deadly strain of the avian flu virus, in dead birds.

France reported four more cases of H5N1 in ducks in the eastern part of the country in August. This region has already recorded cases in swans.

Maret said it was mostly luck that Switzerland had not been infected as well. She said that this was also why the Federal Office's other measures, such as an import ban on poultry from affected countries, were still in place.

In addition, testing and surveillance of wildfowl will continue around lakes and all dead birds found will be routinely checked for the virus.

The Veterinary Office said that the public had a role to play as well.

"We are always saying to the poultry keepers that they have to be vigilant because bird flu can come to Switzerland at any time," said Maret.

According to the latest World Health Organization update, there have been 328 human cases of bird flu in 12 countries since 2003, with 200 deaths.
Most fatalities have occurred when humans have been in close contact with infected poultry.
Health experts fear the H5N1 virus will eventually mutate into a form easily transmissible among humans.
No cases of the human form of bird flu have been reported in Switzerland.

32 cases of the H5N1 bird flu virus were diagnosed in 2005 and 2006, one on Lake Geneva and the rest in the region around Lake Constance.

Total bans on keeping poultry outdoors have been implemented twice in Switzerland: the end of October to mid-December 2005 and mid-February until the end of April 2006.

In October 2006 Switzerland became the first country to confirm it would stock a pre-pandemic vaccine against the human form of bird flu as part of its extended pandemic plan.

It has stockpiled two million doses of the antiviral drug Tamiflu and ordered SFr180 million ($150 million) worth of pre-pandemic and pandemic vaccines. The public has also been told to stock up on bird flu masks. 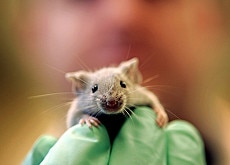 An international team of scientists, including Swiss researchers, has succeeded in immunising mice against the H5N1 bird flu virus using human ... 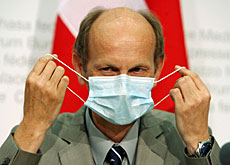 Swiss told to stock up on bird flu masks

The Federal Health Office has issued a list of personal hygiene guidelines for the Swiss population in the event of a bird flu pandemic among humans.