The number of women playing football in Switzerland has trebled in the past five years as the game gradually loses its male-dominated status.

Football researcher Marianne Meier explains how attitudes have changed to women involved in the sport and why more women are getting interested in football.

Meier plays football, has advised the federal police on security at Euro 2008 and has written a book on women's football in Switzerland. She also works for the Swiss Academy for Development, an international development foundation, to promote women's sport in developing countries.

swissinfo: How have attitudes to women's football changed in Switzerland?

Marianne Meier: The change can be demonstrated with figures: there were 8,000 women and girls registered as players in 2003 – this year there are more than 20,000.

The crucial point came when the Swiss Football Association (SFA) fully integrated women and girls into the organisation. Girls' football became known as children's football, sending out the message that kids could come along and kick a ball whether they were girls or boys.

In the past eight to ten years a lot of stadiums have been modified, bringing in a lot more comfort, nice seats and food and enough women's toilets. In Bern – where the Young Boys play – they have a women's day where they can get in for SFr10 ($9.90) and they give away lipstick with the club's logo.

swissinfo: How do women now view the sport?

M.M.: Football is getting more commercial, visible, more socially presentable and respectable. It is no longer what men do on Saturday afternoons. Also, the players are not just sport stars but idols, like pop stars. This development has increased football's popularity for a broader audience.

The bigger the event, the more women attend in the stadiums and watch on television. In normal league matches the number of women is lower. But nevertheless, women make up around 30 per cent of fans in stadiums.

swissinfo: Is there a feminine side to football?

M.M.: If you compare male and female tennis, the male sport is more powerful. But many people prefer the female version – not only for the skirts, but because you see more variation, creativity, technique and tactics.

Women's football has developed over the years. If you compare the first world championships in 1991 with the one last year, it's a whole new game. Technique has improved tremendously, it has become faster and the tactics are now more sophisticated.

swissinfo: Will this attract more supporters?

M.M.: Attention from the media and spectators is not as strong as for men's games. Only friends and family watch women's games in Switzerland. It is different in Germany, where the women are world champions.

They attract crowds and have a very emotional following, players are known in the street and the media takes an interest. This increases visibility and acceptance of the game, dispelling stereotypes. This is a whole new phenomenon regarding women's football.

swissinfo: Can this spread to Switzerland?

M.M.: I see potential for the world championships in Germany in 2011. Germany has a lot of knowledge about marketing and infrastructure after hosting the 2006 men's World Cup, which will promote women's football. I hope this acts as a catalyst for other countries.

In Switzerland there is now a training camp for 13- to 14-year-old girls organised by the SFA in Huttwil in the Emmental region. By the time they are 20, there will be far more quality in Swiss women's football. We need to wait a couple of years to see the fruits of these investments.

Organised women's football in Switzerland was officially recognised in 1970. In the same year the Swiss women's national team played their first match against Austria, winning 9-0.

The 1997/8 season saw the first women's football player of the year award, which went to SV Seebach player Sonja Spinner.

A centre of excellence for young women was opened at the National Centre for Sport in Huttwil.

The Swiss women's national team is ranked 28th in the world and is hoping to qualify for the 2009 European championships in Finland. 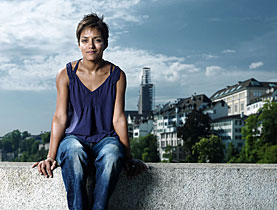 Millions of filmgoers know the story of the Indian girl who defied her parents to play football, but not many know that the film's inspiration ... 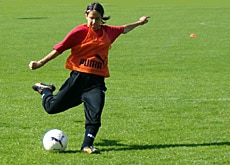 The Swiss Football Association (SFA) is hoping to breed success in the women’s game with the opening of a new centre of excellence for young players.