No need to pay a fortune for an original artwork. The Swiss Art Supermarket, now in its 20th year, sells unique pieces starting at CHF99 ($100).

You just pop your chosen items in a trolley and pay at check-out, like in a regular supermarket. This all happens from November to January in Solothurn, northwest Switzerland.

The concept aims to take the mystique and elitism out of buying art by bringing a large range of contemporary work to a wide, new audience. More than 7,500 works are on offer, created by 120 artists from 12 countries and priced from CHF99 to CHF599.

The Art Supermarketexternal link concept originally came from Barcelona and is well established in Germany, but the Solothurn event is unique in Switzerland. Its founder, Peter-Lukas Meier, says he looks for originality, creativity and technical skill when he makes his selection. He tries to provide as much variety as possible.

But the venture is not without its critics. When it opened, some artists boycotted it, claiming it devalued their work. Artist Priska von Gunten told Swiss public television, SRF, that she is sometimes criticised for participating.

The Swiss Art Supermarket has survived these challenges and sells several thousand pieces every year. 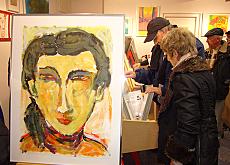 Stacking the shelves with contemporary art

Supermarkets belong to one world and art belongs to another, unless of course you happen to be in Solothurn where the two are cheerfully merged in ...