The Swiss Foreign Minister, Micheline Calmy-Rey has wrapped up her trip to South Africa with a visit to one of the country’s poorest townships.

Calmy-Rey travelled to Alexandra –a slum of Johannesburg where some 500,000 people live in crowded conditions – to see another side of the country.

Her visit to Alexandra came a day after she opened the new Swiss embassy in Pretoria, where she said Switzerland wants to work more closely with South Africa in pursuing joint development programmes.

While on the first leg of her African tour, Calmy-Rey added that Switzerland was also keep to help bring peace to Africa.

During her speech at the opening of the embassy on Thursday, the foreign minister told guests and officials that Switzerland was aware of the need to adopt a regional development approach.

"Many of the key developmental challenges for enhancing the well-being of the people of South Africa track across borders and can only be tackled by combining resources among neighbours," she said.

Calmy-Rey said Swiss aid programmes would cover southern Africa as a whole in future, with a strong emphasis on governance, natural resources management and HIV/Aids.

She said the Swiss had a long history of involvement in peace efforts in the Great Lakes region, as well as the current peace process in Burundi.

"We're exploring the idea of working together, especially in the social integration of women soldiers and child soldiers and maybe giving them skills training so they can be properly integrated into society," revealed Zuma.

Finally, Calmy-Rey announced a joint action plan between the two countries on behalf of women.

"Despite the constitutional, legislative and institutional framework that exists in South Africa and Switzerland, the majority of women are still confronted every day with a disproportionate level of violence, unemployment, illiteracy, poverty and exposure to the Aids virus," she said.

Swiss plans have already been drawn up to take advantage of South Africa’s uniqueness within Africa.

“We have seen the potential for a regional approach in southern Africa, so we will phase out the existing South Africa programme,” Max Streit, the Swiss Agency for Development and Cooperation's (SDC) programme officer for southern Africa, told swissinfo.

The SDC has been active in South Africa since 1994, covering areas such as governance, education, HIV/Aids and land affairs.

One Swiss-backed project in South Africa, which aims to improve psychosocial assistance to children affected by HIV/Aids in the family, is being replicated in Malawi, Mozambique, Namibia, Zambia, Uganda, Tanzania and Zimbabwe.

“There was a South African to help mediate on the risk of conflict during elections. It was very successful having someone coming in from outside Mozambique and sharing their views and experiences on election-related issues,” said Anne-Sophie Gindroz, the SDC’s programme officer for Mozambique.

Calmy-Rey is set to move on to Mozambique from February 21 to 23 to discuss bilateral relations, development and peace projects with government ministers.

She will meet foreign minister Leonardo Santas Simão, but while the focus of this part of her trip will be on development, she is also scheduled to meet the country’s finance minister.

Accompanying her will be the SDC's François Binder. Head of the SDC’s East and Southern Africa division, Binder told swissinfo that the two countries on Calmy-Rey’s itinerary couldn’t be more different.

“South Africa is the driving force politically and economically in the sub-continent and Mozambique is very much a poor country - the difference exists in the assistance they receive from external donors,” he said.

The SDC’s own activities in Mozambique centre around poverty reduction; in South Africa, the Swiss agency has been helping the country in its transition from apartheid to a solid democratic regime.

Every year, Switzerland sends aid worth SFr35 million ($28.4 million) to Mozambique, making it one of the top-ten international donors to the African country.

Micheline Calmy-Rey’s five-day African tour takes place from February 19-23.
She is visiting South Africa and will then head to Mozambique.
South Africa is an important trade partner for Switzerland - trade between the two amounted to SFr1 billion ($810 million) in 2002.
Swiss businesses active in South Africa employ 22,000 locals.
Switzerland is among the top ten donors to Mozambique, donating SFr35 million in aid every year.
The Swiss Agency for Development and Cooperation has been working in Mozambique since 1979 and South Africa since 1994. 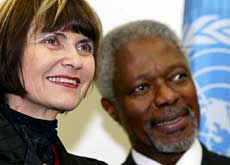 The Swiss foreign minister, Micheline Calmy-Rey, has presented an unofficial peace plan for the Middle East to the United Nations ...