A Swiss organisation working to eliminate forced marriages says it counselled a significantly larger number of children in 2016 than in years past.

Fifty-one children under the age of 16 sought advice last year from the Centre of Competence against Forced Marriage in Switzerland, Anu Sivaganesan, head of the centre, told swissinfo.ch on Friday.

That is up from only five such reported cases in the decade between 2005 and 2015, according to Sivaganesan, confirming other Swiss media reports.

“We can see a general rise in forced marriages with minors, but it is particularly strong among the under-16s,” Sivaganesan told Swiss newspaper Luzerner Zeitung.

Switzerland has banned forced marriages since 2013.

Eighteen also is the minimum legal age for prostitution, which is in Switzerland regulated as a lawful economic activity.

Sivaganesan said the higher number of consultations is not just due to a rise in forced marriages among minors, but also a result of more public awareness about the problem.

The centre provided counseling for recent migrants from conflict-ridden nations such as Syria, Afghanistan, Eritrea, Somalia and Iraq where forced marriages are a problem, Sivaganesan said.  That reflects the shifting status of wars and conflicts around the world.

The Swiss government reported in 2012 that forced marriages were most common with young women  - and men - whose families originated from the previously war-torn Balkans, Sri Lanka and Turkey. Of those young women, 91% were born or raised in Switzerland.

In 2012, the Swiss parliament passed a series of measures that came into force in 2013, increasing jail sentences to a maximum of five years for people found guilty of coercing others into a marriage. This applies regardless of whether the marriage was arranged outside of Switzerland.

In addition, Swiss registrars must refuse to officiate when they come across forced marriages and are required to report suspected incidents to judicial authorities.

The new law is no “miracle cure” said Sivaganesan, and needs time to have more of an effect but also should be reinforced with extra measures to physically protect victims. For example, all of Switzerland should follow the model that the city of Bern provides by helping people protect themselves through changes in their names and addresses.

The Swiss government’s initial programme against forced marriages, starting in mid-2013, ends in August 2017. Officials say they have not yet decided what to do next, though the cabinet is due to consider a report on the topic this year.

No happily ever after The ‘harmful custom’ of forced marriage

Following the report by a specialist Swiss website of 119 cases of forced marriages involving minors in the country so far this year, swissinfo.ch ...

The number of forced marriages involving minors has increased significantly in Switzerland, with a specialist Swiss website reporting 119 cases so ...

The government is currently considering how to tighten up the protection of victims of forced marriages in Switzerland. There is little data on ... 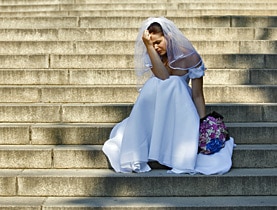 As parliament prepares to debate forced marriages, calls are mounting for more to be done to stop the practice, prevalent among some parts of the ...