South Africa is celebrating ten years of democracy following the end of apartheid and the peaceful transition of power from whites to blacks.

In a conversation with swissinfo the Swiss ambassador to South Africa, Rudolf Schaller, described the country as a ray of hope for Africa.

Apartheid may now be history for South Africans, but, in the United States, lawsuits by victims of apartheid are still pending. These demand compensation from international companies, including Swiss banks, for support given to the white minority regime.

Pretoria does not support these lawsuits and says that the best way to compensate South Africans is to have these companies invest in the country.

Four years ago, Schaller became the Swiss ambassador to Pretoria at about the same time that the current president, Thabo Mbeki, was elected into office.

He is convinced that Mbeki will be re-elected in polls to be held on April 14.

swissinfo: What has changed in South Africa during these past ten years of democracy?

Rudolf Schaller: The first president of a free South Africa, Nelson Mandela, was the main person behind the opening of the country to the outside world. With the end of apartheid he led South Africa out of its international isolation. Mandela made the country ‘socially acceptable’ again, and foreign investors began coming back.

Thabo Mbeki, the second president of democratic South Africa, had the task of consolidating these achievements. For Mbeki, it was more a question of getting domestic affairs, including economic affairs, under control.

swissinfo: What are the biggest problems facing the new South Africa?

R.S: There is still an enormous gap between the industrialised, highly developed South Africa which is on a par with Europe, and the rural parts of the country.

More than 30 per cent of homes do not have running water or electricity. The quality of health care and education is extremely poor in rural areas. The country remains divided between rich and poor.

swissinfo: Between 1995 and 2002 unemployment increased by about 30 per cent. In a society where crime is rife and Aids is endemic, this is bound to cause more unrest. How do you see the future of South Africa?

R.S.: I am convinced that South Africa is on the right path despite its problems. Internationally South Africa is considered a partner country. President Mbeki and his government are warmly welcomed on the international stage and high-ranking officials continue to visit the country.

In addition, South Africa plays a very important role in integrating the whole African continent. This is a consequence of Mbeki’s foreign policy, which puts the emphasis on Africa.

In general, I believe that the peaceful transition from apartheid to democracy has made South Africa an example to follow.

swissinfo: In February, Swiss foreign minister Micheline Calmy-Rey visited South Africa. How would you describe cooperation between Bern and Pretoria?

R.S.: After the end of apartheid Switzerland and South Africa agreed to cooperate on a number of projects. These are mainly initiatives to promote peace in other countries.

For example, Switzerland and South Africa hope to launch a project in Burundi that will re-integrate female and child soldiers back into society. We also want to work together to support the promotion of women’s rights in Africa and step up the fight against Aids.

swissinfo: Where does Switzerland stand in terms of investments in South Africa?

R.S.: Switzerland is the fifth largest investor in South Africa. In 2003, trade volume amounted to about SFr1 billion. Investments in South Africa have more to do with general economic conditions than reparations.

The South African government has set out “black economic empowerment” policies to improve the financial status of blacks. Basically the goal is to give better business financing opportunities to black entrepreneurs and firms, make more positions available in upper management, and increase training.

swissinfo: Switzerland has filed a request with the highest court in the US for the tightening up of the law governing class-action lawsuits for victims of apartheid. Do you think Swiss businesses targeted in the suit put pressure on the Swiss government?

R.S.: Switzerland’s demands have nothing to do with South Africa. It is a matter of principle that goes far beyond apartheid complaints. Switzerland questions the extraterritorial rights used by the American courts in this situation.

swissinfo: What can Switzerland do to ensure that South Africa ends up a success story?

R.S.: We’re doing a lot already. The Swiss Development Agency has a ten-year programme, which is coming to an end. Now Switzerland is drawing up a new regional programme.

It is important to support South Africa not only to strengthen the economic and social situation there but also because that will benefit neighbouring countries and the entire continent.

In general, the relationship between Switzerland and South Africa is healthier than it has ever been before.

Despite serious problems such as Aids, poverty, unemployment and criminality, the Swiss ambassador to Pretoria is convinced that South Africa is proceeding on the right track.

Rudolf Schaller says South Africa is improving its domestic affairs and is recognized internationally as an outstanding global partner.

Switzerland is the fifth-largest investor in South Africa. In 2003, trade volume amounted to about SFr1 billion. 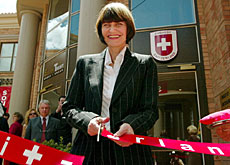 The Swiss Foreign Minister, Micheline Calmy-Rey has wrapped up her trip to South Africa with a visit to one of the country’s poorest townships. ... 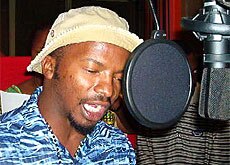 Apartheid destroyed civil society in many of South Africa's impoverished areas. But community radio is proving to be an effective tool for ... 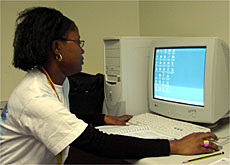 ICTs point to way out of unemployment trap

Conventional wisdom says entrepreneurs are born, not made. But a group of underprivileged South African youths is hoping to prove the opposite, ... 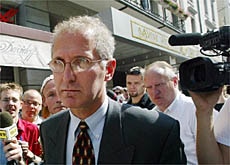 The South African government has asked a United States court to dismiss apartheid lawsuits brought against major multinationals, including Swiss ...