Doris Leuthard, a member of the Swiss Federal Council, is stepping down at the end of this year.

“I look forward to the last three months, and I will commit myself right up to the last minute,” Leuthard promised at a media conference in Bern on Thursday morning.

As one of the seven members of the Federal Council, Leuthardexternal link is responsible for environmental, transport, energy and communications issues. She held the rotating Swiss presidencyexternal link in 2010 and 2017.

"I was very happy to do this job,” she said, her voice full of emotion. Speaking in German, French and Italian, she thanked her colleagues and paid tribute to their professionalism.

“Switzerland is an economically powerful country. It has changed a lot in ten years. It is important to keep a balance between the different interests and not to seek confrontation,” said Leuthard, hinting that this would be one of the challenges of the next legislature. The next parliamentary elections are scheduled for October 2019.

Leuthard, 55, has been in the Federal Council, the Swiss executive body, for over 12 years – the longest of the seven current ministers. She was elected on June 14, 2006, taking over from her party colleague Joseph Deiss.

Prior to her current cabinet seat, she headed the economics ministry from 2006 to 2010. When she joined the cabinet, she was president of the centre-right Christian Democratic Party, having served as a parliamentarian from 1999 to 2006.

Her resignation comes just two days after Economics Minister Johann Schneider-Ammann announced his retirement. She acknowledged that it was perhaps less-than-ideal for the seven-member cabinet. However, she pointed out that even if she were to stay for another year, at any time there could be a double departure of ministers.

Leuthard, from canton Aargau in northern Switzerland, has always been one of the most popular ministers in government and has almost never been defeated at the polls.

“I won 16 votes out of 18 because the population showed maturity,” she said. “Contact with the citizens was very important.”

She will probably be best remembered for her contribution to creating Switzerland’s Energy Strategy 2050, approved by nearly 60% of voters last year. One of its key elements is to phase out nuclear power in Switzerland.

More recently, her department has had to deal with a scandal after an audit found that PostBus had been manipulating accountsexternal link.

Without elaborating, Leuthard said it was time for “new, fresh forces” to join the government. The question is, who should take the seats left vacant by Leuthard and Schneider-Ammann? After the latter announced his retirement on Tuesday, the Swiss media called for him to be replaced by a womanexternal link for the sake of gender balance within the seven-member cabinet. Replacements will likely be chosen in early December.

It's a day to be proud, said Doris Leuthard, Switzerland's transport minister, visibly moved as she spoke with swissinfo.ch at the opening of the ...

Swiss Economics Minister Johann Schneider-Ammann will leave the Federal Council (executive body) by the end of the year, it has been confirmed.

Numbers game The political equation based on a magic formula

How many seats are there in the Swiss cabinet? The answer is seven. But how does Switzerland do the math to reach that figure?

Nineteen former Swiss presidents are still alive. What does this record say about the country’s political stability and leadership?

President Doris Leuthard ‘Switzerland is a rock in turbulent waters’

Switzerland's president for 2017, Doris Leuthard, says her job is to give the people a feeling of security in a time of great uncertainty. 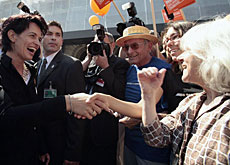 Leuthard steps up to the cabinet

Doris Leuthard, a member of the centre-right Christian Democratic Party, has won election to the Swiss government after just one round of voting. ...