A handful of individuals possess as much wealth as the poorest half of the world’s population, finds a new study from Oxfam. That doesn’t differ much from the situation in Switzerland, where a few super-rich people hold most of the spending power.

Bill Gates, Mark Zuckerberg and Carlos Slim all belong to club of the eight wealthiest people in the world, according to Oxfam’s research published ahead of the World Economic Forum in Davos. Together, those eight individuals are worth some $426 billion (CHF431 billion), whereas about 3.6 billion of the world’s people combined hold just $409 billion in wealth.

Switzerland is considered to be one of the world’s wealthiest countries, with a wealth average 11 times that of the rest of the world. But its distribution of wealth doesn’t look much different, as the latest available tax data shows.

The list of the ten wealthiest people in Switzerland is headed up by Ikea’s founding Kamprad family, Swiss-Brazilian investor Jorge Lemann and the Basel-based Hoffmann and Oeri families, active in the pharmaceutical industry.

The data in Oxfam’s study are based on the Credit Suisse Global Wealth Databook 2016external link and Forbes’ current list of the world’s wealthiest individuals.external link

Lower earners have hardly any more spending money than 14 years ago – the opposite of high earners, according to the Swiss Trade Union Federation. 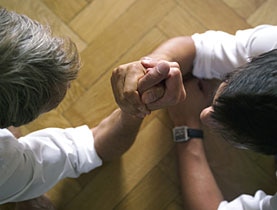 Switzerland's citizens are wealthier, healthier and living longer, but pension authorities have warned the gap between the rich and the poor could ...