Police rescued a head of state from the United Nations complex in Geneva on Tuesday after a spectacular attack. This scenario was carried out in a simulated security exercise to test cooperation between the UN services and Swiss police.

Several dozen members of UN security and Geneva cantonal police took part in the simulated rescue operation on Tuesday morning at the Palais des Nations in Geneva. In the exercise a head of state was supposedly attacked in one of the UN’s human rights conference halls.

A fake charge was detonated in the room targeting the official. Armed guards immediately escorted the diplomat from the building and airlifted him to safety in a Swiss Puma military helicopter. The entire exercise took only one hour.

Switzerland deployed dozens of officers for the operation, including an armed intervention force from the cantonal gendarmerie, a so-called “close-protection force”, as well as police on motorcycles and a helicopter rescue team.

Security incidents affecting international organisations in Geneva are rare. In 2004 the United Nations began stepping up security at its sprawling Geneva headquarters to protect against possible terrorist attacks. This followed the bombing of UN offices in Iraq the year before. The UN invested around CHF30 million ($32 million) to modernise its security perimeter fence and boost the number of security guards in Geneva.

In all, some 40,000 international diplomats and civil servants are based in Geneva; in addition there are around 2,400 staff working for 250 non-governmental organisations. Around 8,500 staff work for the United Nations family in Geneva, which is the largest concentration of UN personnel in the world. Some 2,700 meetings and conferences are also held every year in Geneva, attended by over 200,000 delegates.

An unpaid United Nations intern who was forced to live in a tent in Geneva due to the high rents has resigned from his post calling the internship ...

Parliamentarians in Bern have given the green light to increase Switzerland’s budget for so-called International Geneva by a third to CHF117.2 ...

World view Behind the scenes in Geneva

Under-secretaries, trainees, ambassadors, nutritionists, security guards and many, many more: around 8,500 people work for the United Nations ... 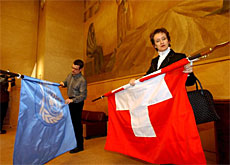 The United Nations has asked the Swiss government to step up security at its Geneva headquarters to protect against possible terrorist attacks. ...