At the “Joy in Faith” forum in the German city of Fulda, he quoted a passage from the Bible which said homosexuals should be punished by death.

Regarding homosexuality, the 73-year-old bishop quoted two verses from the book of Leviticus, including Leviticus 20:13: “If a man also lie with mankind, as he lieth with a woman, both of them have committed an abomination: they shall surely be put to death; their blood shall be upon them.”

In response to applause, he continued: “Both of these passages alone suffice to clarify unambiguously the church’s position on homosexuality”.

In his opinion, the passages also had implications for the definition of marriage and the family. “There is no diversity when it comes to marriage and family models, although a book has just come out in my bishopric called ‘Family Diversity’,” he said.

“Even speaking of family diversity is an attack on the Creator.”

The book he is referring to is “Family Diversity in the Catholic Church” by Hanspeter Schmitt, a professor at the Chur University of Theology, and Arnd Bünker from the socio-pastoral institute in St Gallen. The book addresses church teachings on the issue of family.

Swiss gay organisation Pink Cross said it was “shocked and angry” by Huonder’s comments, calling for a “public apology for the latest gaffe”.

Pink Cross said it was looking into how such hate speech could be prosecuted, pointing out that representatives of the church do not live in a legal vacuum.

Liberal Catholics have taken to the streets to show their opposition to the bishop of Chur, Vitus Huonder. They say he pursues a policy of exclusion.

On Monday, Huonder released a statement in which he regretted that his comments had been misunderstood and interpreted as contemptuous towards homosexuals.

“That wasn’t my intention,” he said, before referring to the catechism of the Catholic Church on the issue.

This is far from the first controversy that Huonder has found himself embroiled in since being appointed bishop of Chur, the capital of canton Graubünden, in 2007.

His fundamentalist interpretation of the Bible has resulted in his opposing issues including women priests and sex education. He believes parents should have the right to have their children exempted from sex education classes in school and that divine law comes before human rights.

Earlier this year Huonder called for a Swiss priest who had blessed a lesbian couple to be sacked. The priest kept his job after apologising to Huonder for causing him any “inconvenience” and promising not to bless any more gay couples.

Equal rights When will the Swiss vote on same-sex marriage?

Recent landmark decisions in the United States and Ireland in favour of gay rights have also made headlines in Switzerland. But what moves are ...

The Swiss continue to distance themselves from organised religion, with religious communities forced to compete with secular leisure activities ...

A Swiss priest who took a stand over the Catholic church’s treatment of gay couples has backed down from his stance on the issue and will keep his ...

The bishop of the diocese of Basel, Felix Gmür, has spoken out against a controversial statement about sex education by the bishop of Chur, Vitus ... 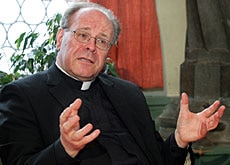 The Vatican confirmation of a new Catholic bishop for the large Swiss diocese of Chur earlier this week has met with mixed reactions. There is ...