Nasa's Phoenix spacecraft has successfully landed on Mars, carrying a Swiss microscope to help find out if life was possible on the Red Planet.

The lander touched down early Monday morning in the northern polar region after travelling through space for ten months, and will spend the next 90 days probing the surface.

Just hours after its arrival, Phoenix was already dazzling scientists with the first-ever glimpse of Mars' arctic plains.

Images sent back by the probe revealed a landscape similar to what can be found in Earth's permafrost regions - geometric patterns in the soil likely related to the freezing and thawing of ground ice.

"This is a scientist's dream, right here on this landing site," said principal investigator Peter Smith, of Arizona University, Tucson.

Phoenix will study whether the ice melted during a time in Mars' recent past and analyse soil samples for traces of organic compounds, which would be a possible indicator of conditions favourable for primitive life.

A Swiss atomic force microscope (AFM) is among the tools that will be used. An AFM can visualise the surface of a sample in three dimensions, looking at details in this case as small as a nanometre across - 1,000 times better than the best traditional microscopes.

The Swiss builders of the AFM – the universities of Neuchâtel and Basel as well as the Liestal-based firm Nanosurf - are happy with the successful landing, but still have a few tense days ahead of them.

"We have to wait and see if it will work," Stephan Stücklin of Nanosurf told swissinfo. "We hope our system survived the flight, but there is also the risk that supporting systems don't function."

Images confirmed it unfurled its solar panels, hoisted its weather mast and unwrapped the protective covering of its 2.4 metre-long robotic arm. It will be several days before the arm is operational.

After a week checking out its science instruments, the lander will begin its mission. Phoenix will dig through layers of soil to reach the ice, believed to be at a depth of up to 30 centimetres.

The scientists who developed the instrument are enthusiastic about its prospects.

"If all goes well, the measures carried out by our microscope could produce a huge shockwave for both the scientific and technological communities," said Sébastien Gautsch in a Neuchâtel University news release last week.

Before the instrument could be used for the mission, a major hurdle had to be overcome - its size. Phoenix is the size of a golf cart, meaning a normal-sized AFM would never have been included for the trip.

During the development, the researchers at Neuchâtel University were able to miniaturise the components - it is now the size of a matchbox - as well as automate its functions.

"The more the autonomous the microscope is, the more likely the images it generates will be of higher quality," explained Gautsch.

The AFM is also designed to overcome the tough conditions it faces, including vibration, radiation and freezing temperatures.

Beyond the search for conditions that could have been favourable to some form of life, Nasa is also interested in finding out how much water is available on Mars. A way of planning future manned missions and perhaps making the Red Planet an outpost for further exploration of space.

The Phoenix mission is the first in Nasa's "Scout" programme.

Phoenix is designed to study the history of water and search for complex organic molecules in the Martian northern polar region.

The mission is an international effort: the project management lies with Nasa's Jet Propulsion Laboratory and Lockheed Martin Space Systems.

The scientific side is led by Arizona University, with contributions from the Canadian Space Agency, the German Max Planck Institute, and the universities of Basel and Neuchâtel in Switzerland and Copenhagen in Denmark.

Phoenix's landing was the first successful one of its type on Mars since the twin Viking landers touched down in 1976. It had to plunge through the atmosphere, slowing down from more than 19,300 kilometres per hour to just eight before landing, using a combination of friction, parachute and thrusters.

Rovers Spirit and Opportunity used a combination of parachutes and cushioned air bags to bounce to the surface four years ago.

Phoenix avoided the fate of another polar explorer, the Mars Polar Lander, which crashed into the Martian south pole after prematurely shutting off its engines in 1999.

It inherited the hardware of a lander that was cancelled after the Polar Lander disaster and carried similar instruments flown on the ill-fated 1999 mission.

Phoenix's descent was nearly flawless. The only unexpected turn occurred when it opened its parachute seven seconds later than planned, causing the spacecraft to settle slightly downrange from the bull's-eye target.

The lander planted its three legs in a broad, shallow valley littered with pebble-size rocks that should not pose any hazard to the spacecraft according to project managers. 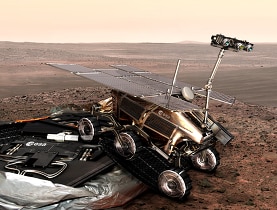 Sometime in early 2015, two parachutes and a glorified airbag will lead the ExoMars Rover, an autonomous robotic vehicle, toward a dusty and ... 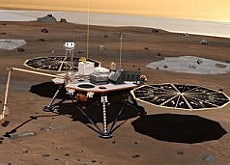 Swiss look for life on Mars

Scientists at Basel and Neuchâtel universities and a Swiss nanotechnology company are part of "Phoenix", Nasa's latest mission to Mars. They will ... 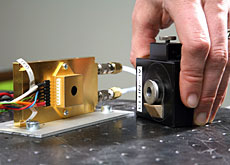 Lasers designed by a Neuchâtel firm will be looking for life on Mars as part of Nasa's 2009 mission to the red planet. The state-of-the-art ...