A change at the head of the Swiss Guard has Vatican observers buzzing with talk of a pontifical slap down of a man seen by many as “too authoritarian”.

But faced with reams of media columns speculating on the reasons behind the departure of Commander Daniel Anrig at the end of January, Pope Francis himself took to the press to defend the 42-year-old from St Gallen. In an interview published in the Argentinean daily La Nacion (The Nation), Francis defended Anrig as having committed “no sin or fault” and said his departure was a “normal change” at the head of the Swiss Guard.

Major Alain de Raemy, a former chaplain of the Guard from 2006 to 2013 and recently nominated Auxiliary Bishop for the diocese of Lausanne, Geneva and Fribourg, says the criticism is exaggerated and Anrig’s departure should be viewed in the context of pontifical reforms.

swissinfo.ch: Opinions about Colonel Anrig vary greatly. You knew him for many years, what is your view?

Alain de Raemy: He is certainly a demanding man, well aware of his role as a commander of a military corps. Demanding, but at the same time, very understanding. He encompasses these two things because he himself spent two years as a Swiss Guard and he is familiar with the situation in which these young men find themselves. For example, he significantly relaxed the rules about time off and holidays and he has also placed more emphasis on training so that the security service is credible.

So I am undecided. I cannot settle solely on the view of a demanding and tough commander. He has not been too tough. Sure, some have felt that he is harsh because they were perhaps not promoted or they did not fulfil a role needed, but that is normal in a disciplinary context.

swissinfo.ch: So his departure is not a repudiation...?

A.d.R.: Exactly. The communication was terrible, which left room for a lot of conjecture, but it is a departure that is normal in the context of the reforms that the current pope wants. It is not yet clear exactly what the reforms will be, but he wants to have the option of changing certain things without getting rid of them altogether.

swissinfo.ch: Can the debate about the commander be linked to the rivalry between the Swiss Guards and the Vatican police?

A.d.R.: The pope is just as critical towards certain demonstrations of security that he considers exaggerated and disapproves of, whether they are carried out by the Vatican police or the Swiss Guard. He doesn’t differentiate between one or the other in his desire for change.

That said, the competition between the two corps has been rather less intense recently because Commander Anrig was a chief of police [commander of the Glarus cantonal police] before becoming head of the Guard, while his predecessors were not in the trade. So he was respected by his colleagues in the Vatican police and also had good relations with the Italian police on the outside.

swissinfo.ch: Does the Swiss Guard still serve a useful purpose or is it just a tradition now?

A.d.R.: The tradition, that’s to say the honour of serving the pope when he appears in public, is the most visible facet but of the Swiss Guard but it is the least important. If the pope wants reform in the sense of having less of this type of visibility it will not bother the Guard because its principal mission is security which is assured by the plain clothes officers and non-commissioned officers.

The military aspect has been handed down through history. They could very well dispense with it, even if it would be a massive change.

swissinfo.ch: They could just as well dispense with the Swiss Guard altogether...

A.d.R.: Yes and no. They could lose the military aspect of it because it is not an army in the classic sense of the term. The Vatican does not need an army to defend its territory.

However, many in the Vatican like the balance that comes from having a police force consisting of Italians and a guard composed of Swiss. The international element is very much appreciated and I don’t think they will let it go.

swissinfo.ch: It’s not the first time there has been controversy around the chief of the Guard. We remember the murder of Commander Estermann by an non-commissioned officer in 1998. In the end, doesn’t it undermine the reputation and credibility of the Guard?

A.d.R.: I don’t think so – not for those who know the Guard outside of what is written in the papers. But it certainly does raise questions. One wonders what kind of reform the pope wants because he wanted this change without having anything against the commander. It’s a little bit of uncertainty, but at the same time, it’s fascinating.

Pope Francis, as I have known him, is very appreciative of the fact that there are people other than Italians who assure his security, but also the fact that they are young. And that these young people can have an experience of faith together, with a sense of camaraderie, in the service of Peter’s successor.

The pontiff has quashed rumours that he dismissed the commandant of the Vatican’s Swiss Guard for being too strict. 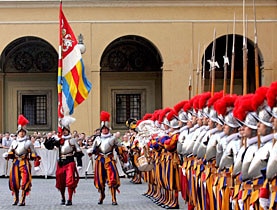 New guard From police chief to protector of the pope

A 36-year-old police chief from central Switzerland has been named the next commandant of the Vatican's Swiss Guard.

Protecting the pope The Swiss Guard

The Swiss Guard has been protecting the pontiff for over 500 years. It is most recognisable for its Renaissance-style garb in the colours of the ...