Leandra Bias, a Swiss woman living abroad, is a volunteer for the British Women’s Equality Party, founded four years ago. What are her thoughts on the women’s strike in Switzerland? And is Britain already a few steps ahead of Switzerland towards achieving gender equality?

Zurich-born Bias external linkhas Greek origins and has lived in Britain since 2013. While studying for a doctorate in political science, she volunteers as a local election and campaign manager in London for the Women’s Equality Partyexternal link, which was founded four years ago to protest against gender inequality (see box).

The author Catherine Mayer and the television anchor Sandi Toksvig founded a party in protest in 2015 to ensure politicians in Britain could no longer ignore women’s rights. They were angry that women are treated as a minority even though they make up half the population.

Among other issues, the party campaigns for equal wages, equal distribution of family work and equal representation of men and women in business and politics, but also, for example, protests against medical research that focuses exclusively on male patients. The party also aims to represent women from ethnic minorities or disadvantaged backgrounds and women with disabilities.

The party gained thousands of members in a very short period. In May 2016external link, the party put up its first mayoral candidates in a number of towns. In 2019, it won its first seat on a town council in Congleton.

As a campaign manager, Bias coordinates awareness-raising campaigns, solicits votes in election campaigns, trains volunteers and monitors vote-counting. She recently gave a lecture at the Austrian Plattform 20000frauenexternal link, a feminist organisation. Her research focuses on feminism in Russia and Serbia.

swissinfo.ch: You are an active member of the British Women’s Equality Party. Was it difficult to gain a foothold in the party as a foreigner?

Leandra Bias: For the Women’s Equality Party, my foreignness has never been an issue. I was warmly welcomed.  They value the different perspective I bring. But I am definitely in the minority.

swissinfo.ch: Why is there a party uniquely focussed on women’s equality? Can you imagine something similar in Switzerland?

L.B.: There already has been something similar. At the beginning of the 1990s, when the first women’s strike took place, there was the FraP – Frauen macht Politik! (Women, get political!)  They even put up a candidate for parliament. But as in most countries, it fizzled out. Many Swiss women don’t like to protest – they see it as very 'unswiss' because protesting divides society. Nonetheless, a second women’s strike is taking place in Switzerland in June [this Friday]. That’s an important sign.

swissinfo.ch: What is the situation with women’s equality in Britain in comparison with Switzerland?

L.B.: I have a very limited perspective because I live in London. London is a liberal hub in Europe. But in general, it seems to me that the British are more advanced on questions of sex equality. The importance of consent is openly discussed here, unlike in Switzerland. And that makes it possible for people with equal rights to have fun together: women can not only say ‘no’ to sex, they can also give an enthusiastic ‘yes’!

swissinfo.ch: What story or experience has most shocked you in Britain?

L.B.: A British politician said of a female politician ‘I wouldn’t even rape her.’ When he was heavily criticised, he was more specific, saying: ‘I suppose with enough pressure I might cave, but let’s be honest nobody’s got that much beer.’

swissinfo.ch: Can you imagine a politician saying that in Switzerland?

L.B.: (pauses for a long time): Something similar could happen in Switzerland, but it would be less vulgarly expressed.

swissinfo.ch: What would be your biggest fear as a woman about returning to Switzerland?

L.B.: I have concerns, but I try to meet these with optimism. Fear is debilitating. Switzerland as a whole can be suffocating but I will look for islands of like-minded people. For example, an urban environment, where no one looks askance if you take your child to kindergarten, and where there are full-day schools.

swissinfo.ch: I will put this a little bit more provocatively. Would you not be concerned as a mother – you are planning to have children – that you might suddenly be shunted aside and have no more career prospects in Switzerland?

L.B.: Yes, absolutely. I do have this concern. I read a study published last year by Lausanne University that shows that even couples who are committed to gender equality are pushed into the traditional division of roles after the birth of a child. Once again, Switzerland is decades behind.

swissinfo.ch: How was your mother’s situation as a woman in Switzerland?

L.B.: My mother was born in 1954, so she didn’t even have the right to vote. Of course, we have achieved something. But there are still so many areas of inequality. For example, in Switzerland I would have to give a reason for why I want my children to have my surname. In Britain, that’s not an issue.

Switzerland’s women didn’t win the right to vote until 1971, not usually considered a laughing matter. But a new film puts a comedic spin on it.

swissinfo.ch: You have a clear plan for your life and want to found your own think-tank in ten years and have children. In Switzerland, you would be asked how you plan to reconcile all of that and whether your children won’t lose out as a result. Do you ever hear anything like that in Britain?

swissinfo.ch: What do the British think about Switzerland and the question of gender equality? Do they know, for example, that women have only been allowed to vote since 1971?

L.B.: No, it’s funny, most of them mix up Switzerland and Sweden. The British have no idea about Swiss provinciality.

swissinfo.ch: Is anyone in Britain aware that Swiss women are striking on June 14?

L.B.: No. Apart from the Women’s Equality Party – they heard about it from me (she laughs).

swissinfo.ch: What ideas have you encountered in Britain that you think Switzerland should copy?

L.B.: Door-to-door campaigning, which has just been rediscovered in Switzerland, is a great thing in my view. Politicians are often criticised for being too far from the people.

Secondly, I like the fact that the British Women’s Equality Party takes a positive and creative approach instead of attacking political opponents. For example, we had a banner emblazoned with the words: ‘Thank you Mr. Trump for making feminism cool again.’ That is much more constructive than tweeting hate commentary about Trump.

Leandra Bias was born in Zurich in 1988. She studied international relations at Geneva University and Russian and European studies at Oxford University. She won an award from Lincoln College at Oxford University for her master’s thesis on Russian feminists. She works as a freelance journalist as well as a teaching and research assistant and is focusing her doctorate in political science at Oxford University on 'The Role of Transnational Feminism in Authoritarian Russia and Serbia'.

“If it’s a woman’s will, everything will stand still” was the slogan of the nationwide women’s strike 25 years ago that brought around half a ...

Inequality The march for women’s suffrage in Switzerland

An hour of making noise in front of the Swiss parliament buildings was enough to find its way into the history books.

Switzerland has been swept up in the grassroots ‘#MeToo’ movement and the growing dissatisfaction among women with the status quo.

Getting Swiss women to take part in town hall meetings is a challenge, even in a place where the majority of the local government is female. Why?

She was a pioneer of the Swiss women's rights movement in Switzerland, dedicating herself to fighting for women to have the right to vote. 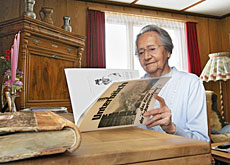 Saturday marked 50 years since women voted for the very first time in Switzerland – in a local ballot in the tiny mountain village of Unterbäch. ...

On International Women’s Day, we asked our readers which Swiss women – past or present – they find most inspiring. Here are the results.