When famous choreographer Maurice Béjart passed away in 2007, few believed that his Lausanne ballet company would survive. But today it remains in much demand, and under artistic director Gil Roman is reviving a production that contributed to changing the face of dance.

Lausanne’s Malley Ice Rink will be the setting from June 17 for the revival, 50 years after it was created, of Béjart’s renowned choreography of Beethoven’s Ninth.

The 250 artists joining Béjart Ballet Lausanne on stage include the Tokyo Ballet, the Lausanne Sinfonietta and singers from the Lausanne Opera.

This is not the first time the company has appeared in an extraordinary venue. Béjart, in an attempt to break the elite circles of dance, favoured sports arenas and circus settings for his grander productions, which he always alternated with his more intimate shows.

“He did not want his ballets to be for the happy few,” says Jean-Pierre Pastori, dance critic and president of the Maurice Béjart foundation.

“He was a true revolutionary,” he continues, since Béjart was one of the first non-narrative choreographers: “He would sketch situations instead of telling a story.”

Béjart Ballet Lausanne was created in 1987 when the controversial, but popular, Maurice Béjart was lured away from Brussels following a well-publicised rift with the Théâtre de la Monnaie, where his Ballet of the Twentieth Century had been created in 1960. His Mudra ballet school also followed and changed its name to Rudra. Béjart made his name by transforming classical dance into modern dance, but with dancers who were classically trained. His most well-known choreographies include Rite of Spring, Bolero, The Firebird and Beethoven’s Ninth.

He also shocked audiences by using dissonant contemporary music by Boulez, Pierre Henry, Stockhausen and Xenakis and by promoting male dancers to prime roles that were erotically charged.

But the public came around to his fiery style and before long his company was performing around the planet. Although Switzerland has been its base for almost 30 years, the company spends up to 80% of its time travelling the world.

Béjart’s assistant director from 1993, Gil Roman has been at the helm of the company since 2007. To explain the BBL’s enduring success despite the loss of its founder, Pastori answers that being a dancer himself, Roman knows how to bring a choreography alive through the dancers. “He succeeds in giving Béjart’s work new life.”

“I don’t attempt to replicate the choreographies, but to revitalise them with the energy and personality of the new dancers,” says Roman.

Roman joined Béjart’s company when he was only 19 years old and with his fluid body and emotional electricity, he became the inspiration to many of Béjart’s choreographies.

When asked what changes he has made to the company, Roman acknowledges that women have regained the prominence that they had lost in Béjart’s pieces. In his dancers, he seeks freshness and spontaneity, regardless of age. Roman, who is 55, remains remarkably boyish himself despite intensive smoking. “I have challenged my body all my life,” he says of his daily training.

Adding new works to the repertoire

Roman became a choreographer under Béjart’s wing. His ten or so productions have brought new vigour to the company, as have those by other invited choreographers.

It is also innovative in its use of film. Roman invited Swiss film director Pierre-Yves Borgeaud to help him produce visual sequences that are woven into the story to give it theatricality and pace.

“I wanted the images to fold organically into the choreography,” he explained.

Close to 100 people depend on the ballet company - with an additional 50 at the affiliated Rudra Béjart School - and despite the continued success, Roman admits that keeping them financially sound is a constant struggle. The decline of the euro precisely at a time when BBL had numerous European engagements did not help.

But tours are where things happen, says Roman, and despite the complexity of moving with more than 60 people and two articulated lorries, he believes it’s important to keep performing worldwide. “We are one of the few remaining companies that offer large-scale productions and who travel so extensively,” he observes.

Japan remains BBL’s most frequent destination ever since Béjart fell in love with the country 40 years ago. His Beethoven’s Ninth was revived in December 2014 to mark the 50th anniversary of Tokyo Ballet in Japan where BBL has enjoyed a cult following for several decades. The piece, also conceived 50 years ago as an ode to universal brotherhood, established the hallmark Béjart style. To many, it has lost nothing of its original appeal, particularly when performed in an extraordinary venue, as it will be in Lausanne.

Gil Roman has performed in Béjart’s most renowned ballets since joining the company 30 years ago, became his deputy director in 1993 and was appointed to take over as artistic director in 2007. He was recently awarded the Мaya Plisetskaya Award 2015, the French National Order of Merit and the 2014 prestige prize of the Vaud foundation for culture.

Lou Spichtig and Laura Fernandez-Gromova dream of becoming top dancers. Competing in the Prix de Lausanne takes them a step closer to realising ...

The Prix de Lausanne international ballet competition can make careers. But it takes place in a country without a strong dance tradition. The ... 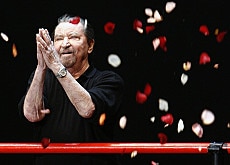 French-born choreographer Maurice Béjart, founder of the Béjart Ballet Lausanne, has died in a Swiss hospital, his company said on Thursday. ...