The Clauses recently made an exceptional visit to the city of Zurich, appearing at the Ernst Hohl Cultural Foundation at an exhibitionexternal link featuring national customs from Switzerland and Austria.

Their trademark are the spectacular – and labour-intensive – headdresses decorated with scenes from rural life. The Clauses typically move in groups of six: two women and four men. However, some people claim that in fact it’s only men under the costumes because the hats and bells would be too heavy for women…

At the end of the year, the groups move from house to house and farm to farm, wishing people all the best for the New Year. They stand in a semicircle, singing songs and ringing their bells.

According to new research, the Clauses go back to a late medieval custom connected to St Nicholas. They were mentioned for the first time in 1663.

In the 15th century, activity during Advent is said to have got increasingly wild and the church authorities began getting concerned by all the loud wandering around at night. In canton Appenzell Inner Rhoden, the custom was banned in the 18th century for several decades.

Swiss gender equality took a big – and belated – step forward exactly 25 years ago, when women in Switzerland’s smallest canton were given the ...

Visitors to the cow shows being held in Appenzell in eastern Switzerland will be amazed not only by the ornately decorated bovine headdresses. 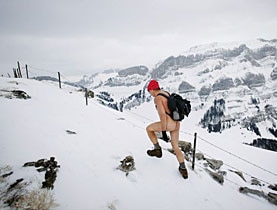 Naked hikers turn the other cheek

The decision by citizens of canton Appenzell Inner Rhodes to ban naked hikers has provided rich pickings for stand-up comedians and satirists. ...