The books of secret codes and hand-penned bibles inside Switzerland's oldest library are usually the preserve of the most serious scholars.

Anyone wanting to sit down and study one of the St Gallen Abbey Library's 2,100 manuscripts must first be vetted, providing references before being allowed through the door. But that is about to change.

A digital upheaval is taking place inside the walls of the 1,200-year-old library as its famous horde of manuscripts is uploaded to the internet.

The library contains some of the world's earliest monastic archives. Half of the manuscript books, or codices, were produced in the Middle Ages.

Some of the best examples are on show in the library's baroque exhibition hall, where a steady stream of tourists comes to inspect the collection of rudimentary books, drawings, dictionaries, poetry and riddles through glass cases.

In another reading room scholars can carefully handle the archives.

Now in a high-tech photographic process, the medieval manuscripts are being transferred online, available for anyone to browse at any time, for free.

"St Gallen is one of the finest manuscript libraries we have in the world," Christophe Flüeler, head of the project team from Fribourg University, told swissinfo.

"We have two aims. First, to make the collection more known to the public. The more ambitious goal is to make a scientific web page, a workspace for manuscript studies where scholars can really work with this library and maybe in the future add new information and new results they might have."

With a $1 million (SFr1.12 million) conservation grant from the Andrew W. Mellon Foundation, the library has started to digitalise 355 manuscripts, which date from before 1000 AD, and is adding them to the Virtual Abbey Library of St Gallen over the next year.

The manuscripts are photographed while opened at a 140 degree angle on a specially created table. A suction device flattens the parchment and the object is snapped from above by a powerful camera. The 100MB image is then digitally stored and accompanied by scholarly descriptions on the website. Each codice takes about a day to photograph.

In an original 2005 pilot project, a selection of medieval manuscripts from 14 libraries across Switzerland was put online, with the bulk coming from St Gallen.

By the end of this year, around 150,000 people are expected to have gone onto the website, vastly outstripping real visitor numbers.

"Naturally for scholars this website is very useful. They can work at home on the manuscripts and if they have to check very special things they can still come to St Gallen," said Flüeler.

"I think the internet will absolutely change the way we work with manuscripts and on the other side the public will also appreciate more the treasures we have in our libraries."

St Gallen's online collection will go on to become the core of a larger virtual manuscript library of Switzerland that is being developed in parallel, and will include another 100 manuscripts from around the country over the next four years.

"One of the things that is really good about this is that it is a scholarly project. Some other digitisation projects just take pictures and put them online," explained Anne Marie Austenfield, a scientific collaborator on the project.

"Whereas with these sorts of materials, imaging the manuscript is just the first step in the process.

"The other thing we do is to have scholars work with us to write descriptions of manuscripts so you have a scholar's indication of what you are looking at, which is helpful not only to lay people and beginners but also to experienced scholars."

The project team hopes the virtual library will in turn develop into a forum for scientific research, enabling scholars to compare and add to the manuscript descriptions Wikipedia-style.

Key to the website will be keeping it free and accessible to all, as the archives represent a slice of history and therefore "belong to humanity".

A virtual library will extend the life of the archives, by cutting down on the number of people handling the texts and causing wear and tear. Incidents of fires and flooding in recent years where valuable archives in Swiss and German libraries and churches were destroyed is just another argument for extra preservation, the project workers say.

Austenfield explained: "I think that was a wake-up call for a lot of libraries. What we can do is add one more layer to preserve the content by preserving the highest quality images we can make."

"In the past these two things were contradictory as the best way of preserving is to keep it on your bookshelf and not show it to anyone. I think we are trying to combine these two things."

The Abbey Library was founded in 719 and is the only major medieval monastery library still standing at it original location. It is the oldest library in Switzerland.

The abbey can trace its origins to a hermitage set up by Irish monk Gallus. By the 9th century – the start of the abbey's heyday – the library had already built up a notable collection of books, including works from antiquity. Its treasures include a Latin manuscript of the Gospel, the oldest book in German and the earliest known architectural plan on parchment.

It became rich through bequests of land and property and was active in the sciences, with books written and studied being there. The monastery became one of the most important north of the Alps, surviving the Reformation and had a revival in the 18th century when the library was remodelled to its current state: a mix of rich woodwork, ceiling paintings and stucco.

In 1805 the newly formed canton St Gallen dissolved the monastery but decided to preserve the library. The whole abbey area, which also contains a magnificent Baroque church, now the cathedral, as well as medieval buildings, became a World Heritage site in 1983.

The collection of books and manuscripts attracts more than 100,000 visitors a year from all over the world. The library also functions as an academic institution for scholars of German and old Irish, thanks to its collection of early medieval Irish manuscripts.

The Virtual Manuscript Library of Switzerland, also known as "e-codices", is a project to digitalise medieval manuscripts from libraries across Switzerland.

In the first stage of the project all 355 manuscripts held by the Abbey Library of St Gallen that were produced before 1000 AD are being digitalised by the end of 2009. Another 100 manuscripts from other Swiss libraries will be digitalised over the next four years.

Manuscripts are reproduced digitally in their entirety, including the empty pages and views of the binding. Scholarly data are also included alongside. Short descriptions of the manuscripts are available in English, German, French and Italian. 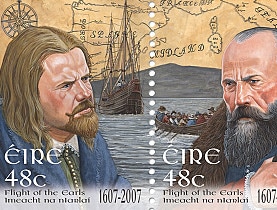 During the "Great Winter" of 1608, a group of Irish nobles passed through Switzerland on a journey of exile which marked a turning point in Irish ...

Opening up books for the soul

Above the entrance to St Gallen Abbey Library, one of the oldest of its kind, is a Greek inscription which translates into English as "pharmacy of ...

Delving into the secrets of century-old books St Gallen abbey was dissolved in 1805 and has since become a Unesco world heritage site. The ...