The Swiss foreign ministry is facing strong criticism about its small diplomatic representations, mainly in eastern Europe and central Asia.

The Federal Audit Officeexternal link says that 31 small embassies with minimal levels of staff often lack a clear profile. And though their work was limited to simply maintaining existing bilateral relations, they cost the state about CHF25 million ($25 million) annually, it said.

In its report, published on Wednesday, the financial watchdog recommended a review of the portfolio of embassies, as well as more ambitious targets.

It said it was difficult to prove how efficient the activities of these small embassies are. More than half of their resources are used for administrative and management tasks, the audit office said. It is also difficult to find suitable staff for such embassies as their responsibilities and challenges are of limited importance.

The financial regulator has called for alternative options, saying the network of small diplomatic representations abroad should not be extended.

“For representations providing limited added value, the foreign ministry must consider alternative solutions, e.g. regionalisation or the ambassador-in-residence in Bern, along the lines of the solutions developed by other countries,” a statement said.

In response, the foreign ministry acknowledged the need to review its strategy, but it insists that a sovereign state needs a broad network of missions to defend national interests, according to the Swiss news agency.

Switzerland pays dearly for its representation abroad – some CHF1.2 million monthly is spent on rent across the world, a newspaper writes.

An embassy has been described by specialists as much more than a building or a work of architecture, representing the universal language of diplomacy.

Switzerland is preparing to open an embassy in Qatar, a country it sees as an increasingly important player in the region. Ambassador Martin ...

By Rachid Khechana in Doha

Accompany Livia Leu as she navigates her first day of work as Swiss ambassador to France.

Ukraine remains "in search of an identity"

Twenty years after the fall of the Soviet Union – and despite the hopes raised by the Orange Revolution – Ukraine is still torn between Europe and ... 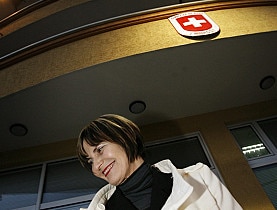 Swiss Foreign Minister Micheline Calmy-Rey opened an embassy in Priština on Friday, a month after Bern recognised the independence of Kosovo. ...