During a week-long heatwave, the thermometer in Geneva has hit 39.7 degrees Celsius, the highest temperature ever recorded north of the Alps in Switzerland.

The last such record of 38.9 degrees was achieved in 1921. The all-time Swiss heat record of 41.5 degrees was set on August 11, 2003 in Grono, canton Graubünden. However, it was recorded using an old measurement technique of weather huts, which generally recorded temperatures a few degrees higher than modern instruments.

2003 saw the last major heatwave to hit Switzerland, but meteorologist Felix Blumer of Swiss public television, SRF, says there aren’t many similarities between the weather events in that year and in 2015.

“You can’t really compare them, because in 2003 we had high heat over many months with maximum temperatures reached in August and it was extremely dry,” he said. “This year it’s only been really hot for about a week and temperatures are set to cool down again soon.”

A recent disaster risk analysis from the Federal Office for Civil Protection listed a heatwave as the third-largest risk facing the country, based on the likelihood of occurrence, number of people affected and economic costs. Climate researcher Sonia Seneviratne of the Swiss Federal Institute of Technology ETH Zurich told Swiss public television, SRF, that “at the end of this century, we expect to see a heatwave like 2003, with temperatures like we’re experiencing now, about every other summer.” 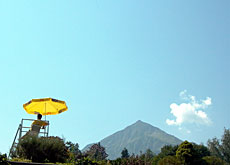 Researchers at Bern University say last summer was the hottest since at least the year 1500. Their study, which was published in "Science" ...

In its 2015 risk analysis report, the Swiss government has named an electricity shortage as the biggest risk facing the country, followed by a ...

Southern Switzerland will feel the biggest effects of climate change in the future, but the rest of the country will not escape unscathed as ...