A few months ago it was announced that Swiss universities would start training imams. Antonio Loprieno, leader of a working group on the issue, tells swissinfo.ch he hopes such a course will contribute to the debate about Islam in Switzerland.

Muslims around the world are currently observing Ramadan, a month of fasting. Thousands of Muslims in Switzerland have also been visiting prayer rooms. This is where the imam plays an important role: calling the community to prayer.

In March, it was decided that Swiss colleges, together with the Muslim community, would get together and work out the foundation of a training course for imams.

A working group, led by Loprieno, a professor of Egyptology at the University of Basel and head of the Conference of Swiss University Rectors, is now looking for a university willing to serve as a centre for such a course.

swissinfo.ch: You deliberately don’t talk of training imams. Why not?

Antonio Loprieno: Imam is a job title which is at the discretion of the Muslim community. Just like Swiss universities produce theologians rather than priests or vicars, we would like to develop a theological curriculum concerning Islam. The expectation is that if this curriculum is of a high standard, Muslim communities could take on the graduates as imams.

Ramadan, the ritual Muslim fasting, is taking place. The challenge for those who are celebrating it in Europe are the longer days in which they ...

swissinfo.ch: A project in Fribourg planned to train imams and people who were professionally connected to the Muslim community, but it never got off the ground. Was there a lack of trust on the Muslims’ part?

A.L.: Trust is a very important component, also in the discussions which we’ve carried out over the past two years. In these joint working groups we’ve had to work together and trust in the two groups who both want to develop this curriculum. This is probably why earlier attempts failed – because they were favoured by one side or the other.

swissinfo.ch: The issue of language was also a problem in Fribourg. Would the course, for this reason, also have to be offered at several universities?

A.L.: In our working group imams are represented from Switzerland’s three linguistic regions. It will probably be difficult to take into consideration all three national languages. But we want to offer aspects of the course in various centres in at least two national languages: German and French.

swissinfo.ch: According to a cabinet report, in Switzerland there are various Islamic groups which are less homogeneous than in other countries. Can such a curriculum take all the various fractions into consideration?

A.L.: I think the simple answer is no. But that’s not what we’ve set our sights on. We would like to make a start, give a sign. In this respect, we’ll look at who is qualified to lead such a curriculum with the expectation that this individual will be open towards other denominations in the spirit of openness and tolerance.

swissinfo.ch: What type of person and structure do you have in mind?

A.L.: We use in this case the “Leading House” concept: a university founds a centre with at least one professor – naturally a Muslim – just like the faculty’s theologians are Christian. This person should on the one hand be an active researcher in the respective theological faculty, on the other, he should develop a curriculum in connection with various Swiss technical colleges and universities.

swissinfo.ch: Isn’t the idea behind offering this course also a way of controlling Muslims in Switzerland and providing certain guidelines for what imams get up to?

A.L.: Control is obviously a word with certain connotations. We don’t want to be seen as selecting or censoring. But it’s true that there is a certain expectation that the offer should adhere to the spirit of the Swiss tradition of tolerance and openness and in that respect also contribute to the qualitative improvement of community life and the Muslim debate in Switzerland.

swissinfo.ch: What resistance and fears have you encountered in your work?

A.L.: Fears exist on both sides which we need to address. On the academic side there is resistance because there has never been a course like this in universities. Some colleagues are worried whether we can succeed in organising something that reflects the high standard of theology at Swiss universities.

On the other side, there are reservations at least in the Muslim community because also for Muslims this academic anchoring of the training of spiritual caregivers traditionally does not exist.

swissinfo.ch: Is it even possible to bridge the gap between the expectations of the Islamic community and the Bologna System, the European agreement that ensures comparable standards for higher education qualifications?

A.L.: This is a very important point. I believe that because the Bolgona System is currently organised so rigidly, it would be difficult to organise a curriculum overnight that matches these criteria. Which is why we’re initially striving for a “Master of Advance Studies”. The expectation is that if this course establishes itself over the years, we could then also offer a foundation studies course with a Bachelors and Masters degree in line with the Bologna System.

swissinfo.ch: Islam is not a national church. Why should taxpayers contribute to the training of imams?

A.L.: An absolutely legitimate question. Let me stress that the government hasn’t yet undertaken any commitments in this sense. This is how I would justify it to the taxpayer: ultimately this initiative guarantees a more peaceful and better-organised structure for Islam in Switzerland, which justifies a minor financial involvement from the government.

Antonio Loprieno was born in Bari, Italy, in 1955.

He attended secondary school at the European School in Brussels, where he obtained a Baccalauréat Européen in 1972.

He then studied Egyptology, linguistics and Semitic languages and literatures at the University of Turin where he received his PhD and worked as an assistant.

He was appointed Extraordinary Professor of Hamito-semitic languages at the University of Perugia in 1987, where he taught and undertook further research until 1989.

He then served as full professor of Egyptology at the University of California, Los Angeles, from 1989 to 2000, where he was head of the department of Near Eastern languages and cultures. During this period, he served as a guest professor at the Hebrew University of Jerusalem, the Ecole Pratique des Hautes Etudes in Paris and the University of Heidelberg.

Loprieno is a member of the Academy of Sciences in Göttingen, the German Institute of Archaeology and various other national and international academic associations.

He has been full professor of Egyptology at the University of Basel since 2000. His main research areas include Near Eastern languages and Egyptian cultural history and religion. 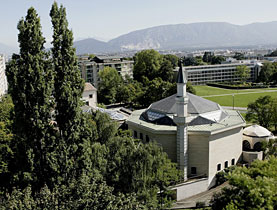 A Muslim leader in Zurich says the proposed ban on the construction of minarets will have a negative impact on Muslims and on Switzerland. Imam ...

Muslim communities and education authorities in Switzerland appear to agree that the country's universities could train future imams. A study by ...

Against the flow Mosque struggles to shrug off extremist label

Accused of preaching a fundamentalist line of Islam, the Errhamen Mosque of Biel is once again in the firing line for having welcomed amongst its ...