A European Court of Human Rights judgement against the display of crucifixes in Italian classrooms has stirred up debate over the issue in Switzerland.

The court ruled on Tuesday that children's freedom not to believe in any religion extends to symbols expressing a belief or religion - thereby satisfying secularists who maintain that a state education should be free from religious influence.

Education director Claude Roch from the Catholic Swiss canton of Valais took a firm stand following the Italian ruling, telling Le Temps newspaper: "I am against the principle of removing existing crosses. If I am handed such a request, I will oppose it.

"In my opinion a crucifix attached to the wall of a classroom doesn't infringe on the freedom of belief of a non-Catholic pupil."

In the Protestant canton of Zurich crosses are banned from schools as part of a legal requirement for religious neutrality.

Robert Steinegger of Zurich's Public Schools Office was also clear on their position, telling the Tages-Anzeiger newspaper that hanging a crucifix in a school would suggest that it was a Christian institution.

This was last an issue in Switzerland in 1990 when a teacher from the Italian-speaking and traditionally Catholic canton of Ticino complained about the presence of a crucifix in his classroom.

The so-called Cadro case ended up in the Federal Court where the judges had to rule on the question of whether crucifixes on the walls breached the doctrine of state impartiality.

The court concluded that the state should not offend the religious sensibilities of pupils or their parents. Moreover, it could not be ruled out that some people would feel offended in their religious beliefs by the constant presence of a religious symbol belonging to another religion.

In other words, the teacher won. But although the Cadro case established a principle, specifically with regard to primary schools, it was not followed by a mass clear out of crucifixes from state schools in Catholic regions. In fact, very little changed.

"As long as nobody complains, there is no problem," law professor Etienne Grisel of Lausanne University told swissinfo.ch.

"The Ticino case was isolated and has not been repeated, which implies that where crucifixes are still visible it's not necessarily a problem. Apparently people don't complain, it's difficult to say why but they just don't."

Grisel pointed out that the issue of teachers wearing the Muslim headscarf in the classroom, once ruled against by the Federal Court, is dealt with in a similar way.

The Italian case was brought by the mother of two children attending a state school who objected to the crucifixes on the walls of all the school's classrooms. When she got no satisfaction from the school's governing body, the woman embarked on a legal battle which ended in the country's administrative court.

The court held that the crucifix was both the symbol of Italian history and culture and subsequently of national identity and dismissed the applicant's appeal.

The latest reverse judgement from Strasbourg sparked angry reactions from the Italian political establishment and the Vatican called it "wrong and short-sighted".

One key difference between the Christian tradition in Italy and Switzerland is that Switzerland is mixed Catholic and Protestant, with neither church granted a special position by the state.

Most of the recent debate on religious symbols in Switzerland has related to the country's third-largest religious group – Muslims.

Felix Gmür of the Catholic Swiss Bishops Conference drew parallels between the crucifix row and the vote later this month on banning the construction of minarets.

"We should not be offended by these symbols which are holy to some people. The Christian tradition in Switzerland is in danger of becoming invisible. If people vote no to minarets, the next step will be Christian symbols," he told swissinfo.ch.

However Simon Weber, spokesman for Federation of Swiss Protestant Churches, did not see a danger of Christianity disappearing from public view.

"We have no worries when it comes to visibility. We still have enough churches to show that we are present and it's not the quality of the objects or the buildings that will change things, it's the work and presence of the church," he told swissinfo.ch.

The religious symbol issue was largely a Catholic one as schools in Protestant areas did not have the tradition of displaying crosses.

Weber said that there was no problem from the Protestant point of view as long as there was neither a ban nor an imposition in public places.

"We are very different to Italy. The great advantage of our system when it comes to small religious issues is that we deal with them at a local level and not in a centralised way as in other countries."

Religious breakdown of the population, 2000 census:

A Muslim basketball player is set to challenge a decision by Swiss sport authorities requiring her to either remove her headscarf or stop competing. 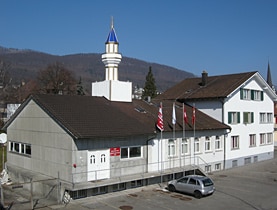 Experts have been studying why it is easier for some non-native religions to build a temple or church in Switzerland, whereas others, such as ... 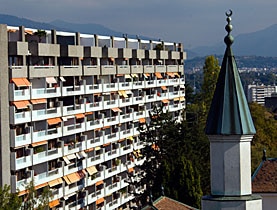 Will Swiss voters ban the construction of minarets in Switzerland on November 29? Not according to an opinion poll published on Friday. The ...