The new and improved Large Hadron Collider (LHC) – the world's most powerful particle accelerator – is being prepared to be restarted, at almost twice the energy of its initial three-year run. Cern external linkphysicist Dave Charlton gives insight into what to expect.

swissinfo.ch: The LHCexternal link is just coming out of a long sleep after an important surgical operation. What has been done to ensure it can run at double the previous energy level?

Dave Charlton: The main work over the past two years has been to open all the connections between all the superconducting magnets around the ring in the LHC and then having opened all those interconnections to test and repair them. That means the system can take the higher electrical currents needed for the higher energies in the new operation of the LHC. It's effectively a new machine.

swissinfo.ch: When will the LHC run at full capacity with high-energy collisions at 13 TeV (tera electron volts), compared with 8 TeV as in 2012?

D.C.: The first proton beam should be in the LHC at the end of March. We are expecting to have the first physics with the beams colliding at those energies at about the middle of May.

swissinfo.ch: You must be eager to see the first physics results… and possible new particles.

D.C.: It's a very exciting time. But you have to realise that in looking for the new phenomena we are particularly keen to find in the next few years, it takes time. We have to take many collisions and look at many different events and really build up a picture of what is happening and look for rare processes.

We will have results by summer this year. This is what we are confidently expecting. But those results are probably not going to be discoveries of new particles. That will come later. We don't know when.

swissinfo.ch: There is a lot of talk about the new LHC being able to shed light on dark matter. What are your thoughts?

D.C.: Dark matter is a real problem in physics today. It's one of the big puzzles. We don't understand what 95% of the universe is made of. We know from astronomical observations that there is dark matter in the universe – probably five times as much as the normal everyday matter that we can see. So what is it? We don't know. One very good possibility is the theory of supersymmetry, which predicts that dark matter is due to particles that we should be able produce at the LHC.

swissinfo.ch: How does super-symmetry work?

It's difficult to explain in everyday terms but you can think of it as being a bit like a century ago when they started to see that antimatter existed as well as normal matter. The anti-electron was discovered back in the middle of the last century. People were scratching their heads about it and then they realised that it was a partner of the electron but actually an anti-particle. If super-symmetry is there we’ll see a whole new set of particles which should be there. They are heavier than the particles we see every day but they would be a whole new set.

But maybe dark matter is explained by something that isn't super-symmetry but which nonetheless gives us particles which we can produce. There are so many open questions we are trying to explore.

swissinfo.ch: Is there a risk you may find nothing new?

D.C.: There is a possibility in this next three-year run that we won't see any new particles beyond the one [the Higgs Boson] we have already discovered [in July 2012].

But we should emphasise that we have a great programme ahead of us just to study the Higgs Boson. We don't know much about it. We have a prediction of what it looks like in the standard model but we are only just starting to measure its properties. There is a 20-year programme to measure the properties of this particle to try to understand it better. It could be a window into new physics. By studying that particle in detail and measuring it more precisely we could get a handle on what the next physics is, or what the next thing coming is.

Also, there could be further Higgs Bosons. Supersymmetry predicts there are at least five Higgs Bosons, so maybe there are additional ones. With every other particle we’ve seen, we've then found heavier partners. Maybe there is a heavier version of the Higgs.

swissinfo.ch: How exactly does ramping up the energy help you in your search for new particles?

In subsequent years we will increase the intensity of the colliding beams much more and so collect much more data and look for rarer processes. But the really big step is this year. This is the biggest step in the LHC programme.

swissinfo.ch: How would you describe the atmosphere among the various teams at Cern right now?

D.C.: The excitement there is tangible. People are there 24 hours a day, seven days a week. There is a great spirit. Everybody is looking forward to the new data. As we've run the experiment before, we know that it works and we will be getting great data and able to do physics with it quickly, so excitement is the dominant emotion by far.

The CHF6.5-billion Large Hadron Collider (LHC), conceived in the early 1980s, is the most powerful particle accelerator ever built. It sits in a 27-km-long circular tunnel, 100 metres below the ground at the European Organisation for Nuclear Research (Cern) on the French-Swiss border, north of Geneva.

In the giant subterranean collider, high-energy protons in two counter-rotating beams are smashed together hundreds of times a second in search of exotic particles at four points around the machine. Travelling near the speed of light, they are guided by thousands of superconducting magnets. The debris is then tracked on huge detectors. The LHC is planned to run over the next 20 years with several stops planned for upgrades and maintenance work.

If CERN found the Higgs boson with half the energy its Large Hadron Collider is capable of, why does it need so much more for its next experiments?

By Bill Harby in Geneva

Collider tour In the bowels of the monster

Thousands of curious members of the public recently ventured underground to see the world's largest particle accelerator, the Large Hadron ...

Scientists at the Cern research centre on the Swiss-French border have discovered a new particle that could be the elusive Higgs Boson – crucial ... 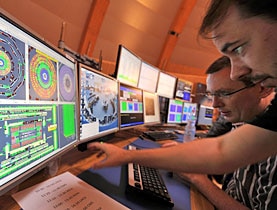 A bluffer's guide to the Big Bang machine

From the Higgs Boson to dark matter: Cern physicist Dave Barney tells swissinfo what exactly experts hope to learn from the world's largest ...